James hadn't played in Amsterdam since 1992 on a balmy night across town at the Paradiso, but returned as part of a trio of European dates that also took in Paris and Berlin. In a 500-capacity venue where the band and crowd were almost eyeball to eyeball, James mixed songs from their number 2 album Girl At The End Of The World with some of their biggest hits and favourites from their back catalogue on a truly special night.

Seeing your favourite band in a tiny European venue is a really special experience. Firstly, like James tonight, they are performing in a venue far smaller than you'd see them in at home, there's no space or budget for the big lighting show, the expansive sound set up. It's raw, naked and vulnerable, but James thrive in that environment and the looks on their faces tells us that they're having one of those nights where everything flows and feels perfect.

The Oude Zaal of the Melkweg is a wonderful venue, it holds around 500 in a circular shape with a balcony and has a fabulous sound set-up, imperative for a band of eight that James are live these days, but there are moments of delicious subtlety that are so perfectly amplified and separated that the impact of it brings grown men and women to tears.

They open with Dream Thrum from Laid and that sound quality is immediately obvious, the fragility of the arrangements crystal clear and the band, as they were for much of the recent UK tour, appear to have found that intuitive connection that makes some tours stand out even more from the crowd. From there they go into three songs from Girl - the lead track To My Surprise, Move Down South and Catapult - that channel the power of the record and then release it with cyclonic impact. They're immediate and they get the audience moving, even if they're not so familiar with them (the biggest record shop in town didn't have the new album when we looked earlier in the day) to the point that we don't hear a single moan about the non-inclusion of Sit Down, Laid, Ring The Bells and a plethora of their other best-known songs.

Moving On, a tale about coming to terms with the death of loved ones, feels particularly poignant in an environment as raw and naked as this one. Sometimes has a magnificent uplifting feel to it and five hundred voices, a mixture of Dutch, British, German and a few from further afield, join in the chorus that feels like some form of catharsis and release. Adrian deserves special mention for making the guitar solo very much his own; true to the original, but very much his own man and an integral part of the live sound.

PS comes from the same album, but is a completely different beast - a spitting, vitriolic vocal delivered with venom and finishing with Tim standing agog, as we do, then starting to dance at the improvised interaction between Saul's violin and Andy's trumpet that entwine around each other. When the band surprise each other like this, then you know you're witnessing something extraordinary. Dear John and Feet Of Clay follow and give further demonstration, not that any is needed tonight, that this band aren't just capable of the big hitters that they're best known for. Mark's keyboards and Andy whistling through his trumpet provide the canvas for the revelations of the former, whilst the latter packs a punch that belies its recorded version without ever compromising its tenderness.

She's A Star and Just Like Fred Astaire form the semi-acoustic section with Adrian on cello and Jim on that magnificent acoustic bass he's brought out this year. Once again the songs benefit from the separation in the sound that accentuates each and every instrument. As Fred picks up pace in this unfamiliar arrangement, Tim loses himself completely in the music as do we and that continues, albeit at a wildly different pace as they return to Girl for Bitch and Surfer's Song.

These two songs are some of the boldest examples of the James 2016 sound. The three minute introduction with its throbbing thrilling insistent bass line turns up the temperature in the room a notch higher, whilst the latter has been a revelation at the live shows, audiences being simply bowled over by the song accelerating just about in control but thrillingly on the edge of potential breakdown. 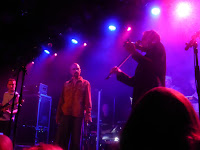 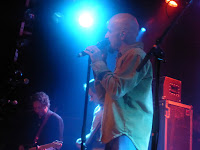 It's testament to them that Tomorrow and Sound, monoliths of many a James set, don't overpower or overwhelm them. Recollections by this point are slightly hazy as everyone is so lost in the music, in a world where everything else is shut out for ninety magical minutes. As well as a lot of love in the room for the band, the audience are as one, a joyful celebration of the band returning after so long away or seeing them perform in such intimate surroundings. Andy joins us in the centre of the floor mid way through Sound as we create a circle around him.

They finish with Attention, the real show-stopper on the recent UK tour. As it reaches the breakdown where the two elements of the song come together and then go their separate ways, the audience come in and almost beat-perfect raise it with hand clapping at a volume that belies their numbers until the song explodes back into life and light spectacularly.

Out To Get You opens up the encore, so crisp and sharp you think it might snap in two if pressed, but every note feels like a heart string is being plucked as well as the guitar string. Mark has made his way to the front of the stage and the interaction between him and Saul has Tim mesmerised as it does us - he lets himself go and loses himself in the music as many of those around us do too. Nothing But Love sees a wonderfully poignant moment where large sections of the crowd wrap arms around each other's shoulders and sway, dance and sing along. It encapsulates the magic and the feeling of unity that's been created (there's a few references to the upcoming referendum) by the eight of them up on stage.﻿ 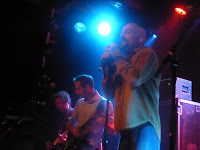 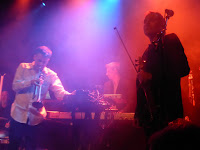 There's no way we're going to let them leave it at that and they have no intention of going anywhere. Tim suggests Come Home and very soon joins us in the crowd, falling on top of us and being lifted around the room, the crowd managing to both dance and move Tim around without dropping him although he does look a mix of shaken and exhilarated when he gets back to the stage.

Amsterdam was a wonderful experience. The band were as good as I've seen them for a very long time, thriving on the intense intimate environment they are performing in, feeding off the energy of a crowd that's there to enjoy themselves rather than drink themselves into incoherence. The set list is a challenging one that refuses to take the easy route of rolling out a series of hits because they haven't been to the Netherlands for so long. Amongst us national barriers are irrelevant, everyone is united by a common love of music, the adrenalin rush of a loud guitar and crashing propulsive drums, the contemplative beauty of a violin solo and the impact one man's words can have on so many.

I'd recommend to anyone going to Europe to watch their favourite band play in these types of venues where there is none of the protection that bigger stages and huge production provide a protection and distance of sorts. The environment, the fans, the connection between them and the band made this one of the very best James gigs I've ever been to and looking around at the beaming faces both on stage and in the crowd, I doubt I was the only one feeling that.

James played Dream Thrum, To My Surprise, Move Down South, Catapult, Moving On, Sometimes, PS, Dear John, Feet Of Clay, She's A Star, Just Like Fred Astaire, Bitch, Surfer's Song, Tomorrow, Sound, Attention, Out To Get You, Nothing But Love and Come Home.

Our reviews of the Girl At The End Of The World tour can be found here.