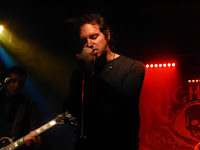 The Creature Comfort brought their own brand of "psychedelicpunkrocksoulgroove" to the Night And Day on Friday night opening up for Bob Log III. We went along to catch a band that lived up to their own self-billing.

Ben Le Jeune is a legend in his own lifetime. As front man of The Creature Comfort he makes it his personal mission to ensure that we enjoy his band's gig. He's up on the boxes that separate crowd from band at the Night And Day, he's amongst us, chiding the poor guy who's stood stock still, eyeballing or stroking the hair of others, seductively flirting with the lady dancing at the front before jumping back on stage and rolling around on his back. A little much perhaps? If they didn't back it up with great tunes, we'd tend to agree with you but fortunately there's no such worries with The Creature Comfort. 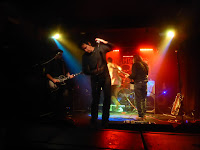 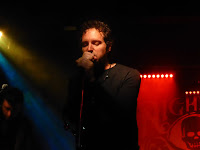 Opening with Step Down From The Sky, it's clear that this is a band that know what they're doing. They remain almost oblivious to their front man, instead creating the very framework that allows him to indulge himself and us with his stage show. That description of their music, from their Facebook, sounds like it could be one big horrible car crash that sounds like none of them, but to our relief they don't over egg their sound, there's so much light and shade to songs like Windowpane and Disconnected Man and even when they go on the attack with the highlight Cool Spot and the fabulously titled Leopard Skin Pillbox Hat, they hit the spot every time.

Email ThisBlogThis!Share to TwitterShare to FacebookShare to Pinterest
Labels: The Creature Comfort