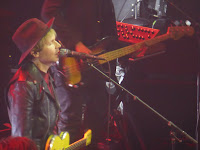 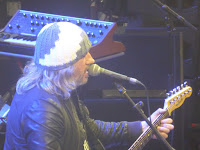 Beck's much-anticipated return to Manchester sold out in minutes when they finally went on sale a few months back and The Albert Hall was rammed to steaming capacity upstairs and down for a set that spanned twenty years of Beck's diverse musical outputs from his breakthrough 1994 single Loser to his critically acclaimed 2014 album Morning Phase. Support came from Manchester's own Badly Drawn Boy.

It's great to see Badly Drawn Boy back on these stages after a long absence. It feels like his tour last year performing The Hour Of The Bewilderbeast has given him his mojo back and although there's no new material in his half hour set, there's a feeling that there is hopefully more to come from him. Always talkative, his focus tonight is the result of the referendum and his view that he wants to fight to change it as people weren't voting with the full facts. He comes back to this several times during the course of his set between songs.

He mixes some of his best known songs - Silent Sigh, Born In The UK and Once Around The Block - with lesser celebrated gems such as Shake The Rollercoaster from his first EP and Photographing Snowflakes, the lead track from his last album, 2010's It's What I'm Thinking Pt 1. He also covers Beck's Puttin' It Down on keyboards. There's a few parallels to be drawn between Damon and Beck and clearly a lot of mutual admiration as both mention during their sets and the response he gets suggests that there's still a lot of love for Badly Drawn Boy.

That Beck chose to play The Albert Hall is a bit of a surprise given that he could probably have sold out the bigger, and superior, Apollo out with little trouble such was the demand for tickets for his first show in Manchester since 2008. It feels like there's too many people in the venue and that the sound system, which is never the best in town, and the size of the place doesn't do justice to the size and scale of what Beck's trying to do. 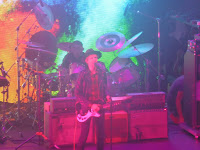 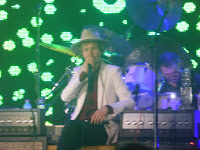 That aside, the set has a little for everyone. The best known songs are pretty much all present and correct - he opens with Devil's Haircut which battles through the muddy sound, the communal self-loathing of Loser is also dispensed with early in the set and whilst the response can't be heard ten miles across town as Rihanna can at Old Trafford, every single person in the room joins in with the chorus. The New Pollution gets a similarly rapturous response.

The problem that an artist that displays such chameleon like tendencies in their recorded output as Beck has is that the live set can feel quite disjointed if not structured in the right way and there's a sense mid-set that he might be losing some of the crowd that are not as intensely connected with the lesser known parts of his catalogue, but what the likes of Soul Of A Man, Paper Tiger and Blackbird Chain demonstrate is that Beck's talents go much further than those instant unforgettable big singles for which he is best known and why he's so revered and celebrated. Wave creates a magically hypnotic state to really drum home just how much diversity there is to his body of work. His intensity never lets up whether he's playing the messianic showman acting as cheerleader for his adoring crowd or where the pace is taken down and the sheer beauty of his craft takes centre stage.

He naturally finishes on a high, Sexx Laws is a bizarre swirling conundrum of a song that works perfectly whilst E-Pro sees the band really let their guard down and go for it full on. The encore of Where It's At is stretched out to include band introductions and a medley that picks up Chic, David Bowie, Kraftwerk and Prince - which just about manages to stay on the right side of the self-indulgent line before going back into one final riotous chorus to send everyone streaming out on the venue on a high and his reputation as a maverick genius firmly intact.