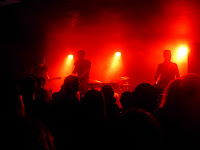 It's ten years since The Longcut unleashed A Call And Response on an unsuspecting and unaware crowd and we've gathered together to pay tribute to a band that refused to make compromises, a trio hell-bent on creating a sonic shit storm that would blow them and you away and take you to another place on a relentless sonic wave.

For those who don't know of them, The Longcut are a Manchester trio that trade in big, powerful rock songs but who veer consciously away from traditional structures and tricks. Front man Stuart spends half his time behind the drum kit, when he's not on keys and singing, which means large sections of songs are by design instrumental and it's at these moments that the crowd are at their wildest, losing themselves in a cacophony designed by three but which feels like it's being created by a whole army rather than just Stuart, Lee and Jon, aided on Holy Funk by two of the opening act Claw The Thin Ice.

Right from the kick off, kick in the face of A Last Act Of Desperate Men, The Longcut leave us trailing in their wake. The low ceiling, loud to the brink of distortion sound of the Ruby Lounge is perfect for this assault on our senses, leaving us staggering out ears ringing for hours afterwards.

Where Holy Funk and A Quiet Life might have hinted at the possibility of a crossover to a more mainstream audience and see the audience at their most delirious, it's when they let loose, throw convention to the wind and look and sound like they're on one massive jamming session that they're at their most potent and powerful, reminding us, as they do far too infrequently these days, that they are one of the most inventive and visionary bands in town. In the second half of the set as the album progresses, songs like Vitamin C and Spires merge together as they do on record into one almost continuous unleashing of the power of the band over an audience completely spellbound by the music.

Tonight The Longcut were unmissable. Whilst an entirely different pilgrimage was taking place just a few miles away, this was a much more private confirmation of a great Manchester band doing exactly what they do best. They might not want to be adored nor claim to be the resurrection, but in one small downstairs club in Manchester we witnessed our own beautiful thing. Whilst this was a celebration we live in hope that new music isn't too far around the corner.

Email ThisBlogThis!Share to TwitterShare to FacebookShare to Pinterest
Labels: The Longcut