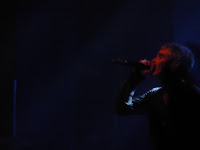 The wait is finally over. From having queued up for hours on Saturday to get tickets to the moment The Stone Roses walked on to stage at Halifax's ornate Victoria Theatre felt like a lifetime for the 1,800 or so devotees braving sauna like conditions to pay homage to their heroes.

By the time the Roses make it to the stage shortly after nine anticipation is at fever pitch and the venue is red hot. Adored is the inevitable opener and the crowd almost drown out the band, not for the last time, by singing the instrumental parts back. Brown struts the stage with a bravado bordering on the cocksure arrogance of a quarter of a century ago. He sounds great too, his oft-maligned voice holds out helped by his choir of sweat-soaked angels.

Each and every song from the debut is met with the adulation that an album that has such legendary status demands. Whilst its production might sound slightly dated now there's absolutely no doubting how much lift the songs get live. Made Of Stone, She Bangs The Drums, This Is The One and the triumphant epiphany of I Am The Resurrection are all cases in point. 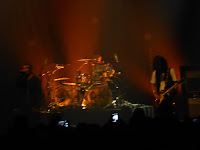 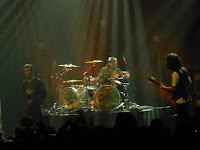 The intimacy of the venue is perfect for these songs. There will be forty thousand times more people in the Manchester council house next week and it's inevitable that something will get lost, but tonight these songs feel as life-affirming as they did in 1989 and the response equally as fervent.

There's no new material other than All For One which curiously gets a much better reception than Fools Gold, Breaking Into Heaven and Begging You with only Love Spreads from the second album generating quite the same response. But that's being slightly over-critical as this evening will live long in the memory and be the best gig ever for many in attendance.

That rhythm section is still as potent as it has ever been; the Roses functioned less when they lost the glue Reni almost invisibly provided. This forms the canvas for Squire to let loose and when he does on Fools Gold and Love Spreads he has few or any peers whilst Ian struts the stage, conducting with his two batons in hand and at one point ending up on Reni's drum riser at the back agog as we are at what his band mates are creating as Breaking Into Heaven drops down into that instrumental section. He doesn't say much other to dedicate Elizabeth My Dear to "energy vampires" and that Waterfall is for the "free-minded ladies." 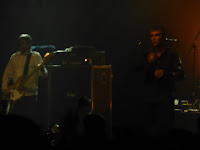 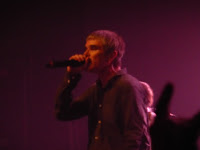 The Roses are well and truly back. There might not be tonnes of new material, although All For One did suffer under the burden of the most unrealistic expectation ever placed on a song, but that's not what the majority want or get. For anyone old enough to remember them first time round this felt like a trip back in time. If you didn't love them then, you won't now, but they're recreating memories for the older ones amongst us and creating new ones for those that weren't around first time. How they'll replicate this at the Etihad heaven only knows, or in the post-gig comedown cares.

The Stone Roses played I Wanna Be Adored, Elephant Stone, (Song For My) Sugar Spun Sister, Bye Bye Badman, Begging You, Waterfall, Don't Stop, Elizabeth My Dear, Fools Gold, All For One, Love Spreads, Made Of Stone, This Is The One, She Bangs The Drums, Breaking Into The Heaven and I Am The Resurrection.