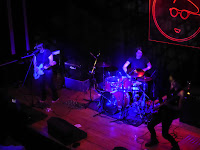 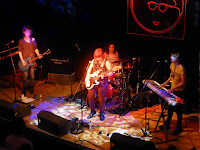 LIINES and ILL are bands with a history having played on shared bills in the past. On Friday night they shared an unwisely late one at the latest instalment of A Queer Revue at Band On The Wall. Joined together by a direct uncompromising approach to their art, the two bands made the late night and the appalling hangover absolutely worthwhile.

If you're going to cover Joy Division you have to do something pretty damn special with it otherwise you shouldn't bother. ILL start with She's Lost Control, a move that could cause people to hate them, but they pull it off spectacularly by making it their own. It's almost out of key, out of tune, but just on the limit, precariously so in that zone where great bands reside, tiptoeing a line between chaos and the spectacular. It sets the tone for the rest of the set too, a ferociously angry set of songs delivered with a smile on their collective faces, driven along by raw almost feral drumming off which Whitney and Harri's shared vocals bounce.

Whether it be the short sharp electric shock treatment of Diazepam or the vitriolic rage at a married lover of Secret Life, ILL are a band that look you straight in the eye, smile with a hint of fun glistening in their eyes while kneeing you in the nether regions. They make being beaten up feel like fun, like a smiling assassin, with songs such as early single Kremlin and their last one ILL Song as their weapons of choice. 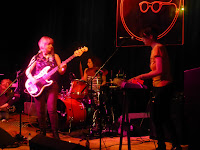 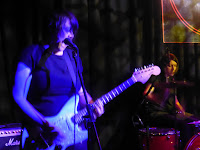 It's gone two by the time LIINES make the stage, but to be honest they're a band worth staying up all night for. No one else is delivering music as captivatingly stark and raw anywhere in Manchester or beyond at the moment. They pummel you with a wall of noise and then tend your wounds with beautiful rhythms that appear from nowhere as the song stops and spins bolt round facing the other way. They do it many times during the set, but it never ever feels like they're repeating the same trick.

By the end of their half hour set Zoe's as breathless as the rest of us and it's no surprise as there's an intensity to their performance that demands every little drop of energy be channeled into it. For a simple combination of bass, guitar and drums they create something that would be equally as powerful in these relatively intimate surroundings as it would be in bigger halls. What they might not have in terms of embellishment, they more than make up for in pure raw adrenalin-driven intensity and a set of songs that aim straight for the jugular and never let go. Never There, last year's breakthrough single and set-closer, is a great starting point, but there's nothing in the set that doesn't stand toe to toe with it - Cold, Blackout, Gone and Be Here each leaving an indelible mark on the listener. Resistance is still futile, submit to them and lose yourself in their black magic.