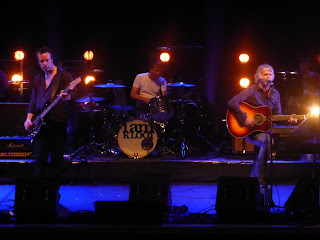 We made the pilgrimage down to London last night to witness I Am Kloot perform their Sky At Night album as well as some selected tracks from their back catalogue with the Millenia Ensemble in the revered surroundings of the Royal Festival Hall.

When a band does a "classic album" run-through, it's often a sign that a band has run out of ideas or is promoting a reissue unless they do something genuinely special with it. Tonight's show is a one-off, at the invitation of Guy Garvey of Elbow who is curating the Meltdown Festival at the Royal Festival Hall over the next few weeks. There's no repeat, no reissue of the album, it's done as a celebration of the album that propelled Kloot into a wider public conscience with the Mercury Prize nomination that accompanied it - Garvey's connection in that he, along with fellow Elbow man Craig Potter, produced the record.

After being given what amounted to a private run through of the performance in the soundcheck our whistle had been well and truly whet for what we were to experience. Sky At Night is without a doubt Kloot's most accessible album, following on from the rough and ready Moolah Rouge which preceded it. Whilst it benefitted from the magic potion that the Elbow boys brought to it in terms of wider appeal and the stamp of approval that almost became a curse (a lady sat behind us telling her friend that Elbow had rescued Kloot from bar jobs and a life destined to be a muso band in the toilet venues of Manchester - patently untrue of course), it still possesses those rougher edges, the dark lyrics, poetic realism and the fact that John Bramwell could never become everyone's favourite brother or uncle in the way Garvey has enamoured the nation with those open-armed peculiarly Mancunian charms of his. 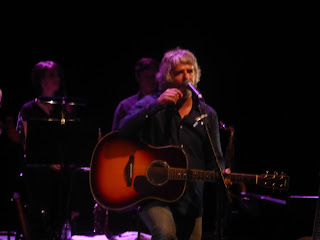 They run through the album in its entirety in order, starting with its lead single Northern Skies, a magnificently poetic longing tale of escaping from the city into the country and looking upwards and losing oneself to the night, a theme that resonates through the album right from its title. As it closes John jokes that the empty seats at the front are for the press they've had kicked out and seconds later it's filled by people who say they're from the Manchester Evening News. It's the first of many beautifully symmetric comedy moments of the night.

On second song To The Brink, which John tells us is written about Pete, the strings of the Millenia Ensemble really come to the fore. Like so much of Kloot's best work, there's so much space available for other musicians to add light, subtlety and shade to its raw ingredients, and that's what the strings and brass do perfectly all night. Rather than dominate or sit in the background, they embellish and uplift at just the right moment with arrangements that either accentuate the delicacy of the song or emphasise their power. 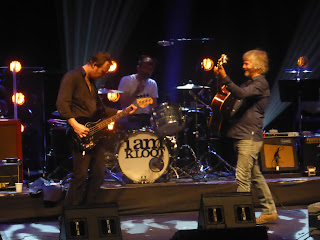 John's on good form, joking at one point that he didn't remember two of the songs off the album as they hadn't played it for so long and then, as we laugh with him, tells us he wishes that it wasn't true, and it's good to see the love that eminates between the band of brothers on stage with their cohorts Tom on guitar and Alan (who John later tells us is in charge of the cosmos) on keyboards and accordian. As the others depart and John's left on stage with Marie, the harp player from the album's sessions, he recalls how Craig Potter recorded the moment they created the album version, which brought a shout from the audience to which John responded "pipe down Elbow" then joked they cursed him as the mic fell from Marie's harp and they had to start the song again.

The comparison between I Still Do and Lately which precedes it is prima facae evidence as to why Kloot are one of the finest bands in the land. The latter is so intense that it's dangling over a precipice of human breakdown ("Lately, it's been a struggle to make up what is left of my mind") whilst I Still Do offers an almost innocent wistful hopeful viewpoint on life and love ("When I was a child, I looked up at the sky, I thought I saw you and I in the clouds passing by"). It's why John is revered by so many of his contemporaries.

The audience sit spellbound and in silence as the songs are played out before them - the constant calling for songs that happens at Kloot shows tempered tonight by the nature of the set. The Moon Is A Blind Eye is perfect for this rearrangement and the ensemble really do enhance the songs without ever overpowering them.  Proof is shorn of its raucous singalong nature, but is actually better for that as it brings the simple genius of it into stark focus.

It's Just The Night is probably one of the two songs John doesn't remember as it hasn't featured in Kloot or solo sets since the album was released. You can hear a pin drop as the very minimalist arrangement pierces the crisp humid reverential atmosphere in the hall. Radiation sees the brass section of the ensemble really come to the fore as they lift the song at the moment the instrumental break kicks in and John kneels perched on his customary beer crate.

However, it's Same Shoes that really steals the show. John had joked earlier that the album ended on a real downer, but it's anything but that. It's a dark piece of real self-assessment that looks back and reflects that the subject, presumably John or the band, are "out of booze, the same clowns, the same shoes" as the brass lingers longingly in the background. You can see John's emotions coming to the surface and ours did too. 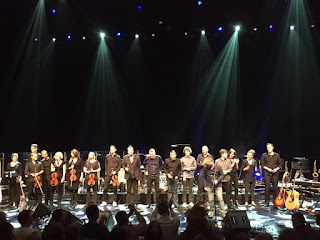 They leave to a rapturous reception but there's no way they're finished and John returns on his own with the string section still seated. The crowd, freed from the constraints of the album format, let loose. Someone shouts David Essex, we assume myopically thinking that John resembles him in some way, which John takes in good humour. No Fear Of Falling is delivered with the intimacy of a small club gig rather than the expansive surroundings of the Festival Hall.

The Same Deep Water As Me is dedicated by John to his girlfriend and in four minutes it demonstrates exactly what makes Kloot such a revelatory band and John the finest lyricist of his generation - "swim out to the ocean, to drown your thoughts out at sea, dip your hands in the water, the same deep water as me" makes the listener's heart burst with love, a tidal wave that's turned into a tsunami of raw emotions by the strings and brass that swirl and envelop us and break down our final defences.

They leave us with These Days Are Mine and Hold Back The Night, two songs that feel absolutely perfect for the expanded possibilities that the ensemble bring with them. Both songs are primed with even more pregnant drama and tension than the album versions. Before Hold Back The Night, John thanks Garvey for putting them on his festival and takes the piss out of the programme's cover photo which shows him with collars up as "the dangers of superglue" to which Garvey responds with a shout of "Get to fuck" before John deadpans "Drunk again" and asks an audience member if they've just really shouted for a song called "Mackerel Fields."

This was a unique performance of a very special album by one of the county's finest and most underappreciated bands, one that never plays by any rules and conventional wisdoms as to what a band should do to be successful. The fact that I Am Kloot can sell three thousand tickets for an event like this is testament to just how magnificent their music ultimately is.