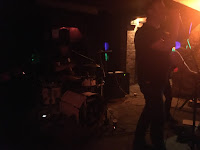 With Inspiral Carpets enjoying a well earned break, singer Stephen Holt has conjured up a new Rainkings line-up. After 20 years away and a well received low key warm up show, they return to a hot and sweaty Oldham as part of local businessman - and Oldham music fanatic - Mick Harwood's “Oldham Rocks” night.

The nucleus of The Rainkings - Inspirals members singer Stephen and their former bassist David Swift - released 2 EPs on the Playtime label and gigged in and around Manchester until leaving the live scene in the mid 90s. The pair of them love songwriting though, indeed both were instrumental in creating that early inspirals sound, and they continued over the years to write away. Swifty is rumoured to have albums and albums of material stashed away. When Stephen rejoined the Inspirals in 2011, there was anticipation that he would revisit The Rainkings too.

They have been busy rehearsing and recording new material. As such, tonight's gig isn't just a celebration of their past, but a nod to their future too. With new members Wimmy (keyboards), Kev (drums) and Cathy from Dub Sex on bass, the band showcase their recent Five Ways EP plus they remind us why The Rainkings matter - bona-fide pop gems like Get Ready, Take and Too Many Words litter the set.

Opening with the aptly titled In From The Rain, one of the newer songs, The Rainkings demonstrate that like a good wine they improve with age. Early single Get Ready is as fresh as ever and after waiting over twenty years to hear it performed live, it doesn't disappoint. The Rainkings sound is enhanced by Wimmy's driving organ throughout the set. No more so than on the still unreleased Good Times - an up tempo rocker that was left off their career retrospective anthology Another Time, which brought together those early eps and hard to find compilation tracks. Such is the strength of their back catalogue that we only get to hear half of that record this evening. We are however treated to the beautiful Take - originally released on the seminal Home LP which featured the likes of The Fall, World of Twist, New Fast Automatic Daffodils and Paris Angels. Dave Swift’s guitar work is stunning throughout but especially on Take. By My Side and the brand new Searcher have a harder edge. It is pleasing to hear that the band have new material in the pipeline. Just An Idea defies its age and Stephen gives a shout out to original Rainkings bassist Carl Wolstenholme who is in the audience tonight. Wimmy adds his own majestic touches to the song whilst Cathy’s driving bass powers it along.

All of the tracks from the recent Five Ways EP are present and correct tonight. It's hard to pick a favourite although Nothing's Set In Stone might just edge it. Too Many Words and Step By Step are poptastic and get a great reception from the crowd.

Getting Nowhere brings the set to a close and leaves the audience hungry for more. It was a pleasure to be here to witness the second coming of The Rainkings. Whilst Stephen Holt has had a prolific few years centre stage with Inspiral Carpets, it is pleasing to see one of their founding members back where he belongs. A truly wonderful guitarist. Much like his friend Graham Lambert, Swifty has a laid back, unassuming stage presence yet he creates a big sound. The Rainkings place in history needs to be re-evaluated. No longer are they the great lost pop band of the Madchester era. Welcome back.

The Rainkings' official site can be found here and they are on Twitter and Facebook. Read our 2015 interview with them here and our extensive 2013 pre-Even The Stars one here.