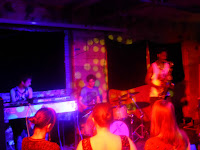 The Comet Is Coming are an instrumental trio from hometown planet earth featuring King Shabaka on sax, Danalogue The Conqueror on keys and Betamax Killer on drums. They headlined Soup Kitchen in support of their new album Channel The Spirits.

We knew little of The Comet Is Coming before this show other than that Danalogue had played in Tim Booth's band back in 2011 and the fabulous Soccer 96 in the intervening years. A chance catch-up at a London James gig led to an invitation to tonight's show and a journey into the unknown for us, which was a seventy-minute joyful trip that felt like a communal coming together of the three of them with their crowd, joined in the moment of creation of a fairly eclectic mix of sounds that never once felt repetitive or uninspiring.

Their songs cover the whole range of musical styles - one minute they're setting us dancing to a beat that would grace a festival tent headline slot hundreds of times the size of Soup Kitchen, then they're creating something that even without guitars feels like a rock and roll moment and the next they're soothing us with a sax / keys / drums soundtrack to an obscure independent film. At points it feels like pure improvisation with one of them taking control at points - there's a two minute plus sax solo intro at one point and later in the set drummer Betamax Killer silences us with a drum solo that sees Dan and Shabaka letting loose some dance moves either side of him that match those of the three girls on the front row who are intoxicated by the grooves being created six feet in front of them. 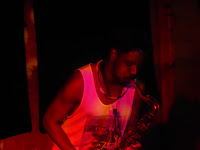 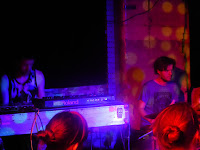 The live mix of instruments and Dan's technical wizardry, at times looking like he's going to pull buttons off his kit, works brilliantly too; the whole thing feels incredibly natural whether they're letting loose and going for the jugular or whether they're adopting a more restrained approach. The sax is used both as a weapon and as a crux in those two very different moments in the set and we're frankly astonished at just how Shabaka manages to play it for the seventy minutes they're on stage without needing oxygen.

We didn't know quite what to expect, and if we're being honest The Comet Is Coming don't produce the sort of music that would normally appeal to us, but throughout we're compelled to sway (we don't dance) and lose ourselves. It's impossible not to feed off them, be moved by the intensity and passion of what they're doing. The hour and a quarter absolutely fly past and by the time they're done we're as disappointed as everyone else that we don't have them for longer.

The Comet Is Coming's official site can be found here and they are on Twitter and Facebook.

Email ThisBlogThis!Share to TwitterShare to FacebookShare to Pinterest
Labels: The Comet Is Coming