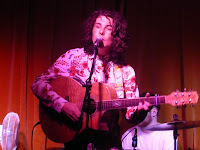 Jordan Drinkwater celebrated the launch of his new EP Pretty Soon with a packed launch gig at Gullivers in the Northern Quarter on Friday night. Boasting an impressive voice and a set full of songs with challenging and different subject matter, the launch also doubled as the debut of the band that he's put together to accompany him.

We didn't know much about Jordan Drinkwater before this show other than enthusiastic recommendations of friends who'd seen him move up from acoustic open mic nights to playing his own gigs releasing his debut EP This Old Man and I in 2014.

Immediately we're struck by the deep rich tones of his voices which do more than tell the stories of his songs, but accentuate them, add light and shade and emphasis at the most appropriate moments. It feels like songs such as The Girl Across The Room and Better Off Without Me are him telling us a story rather than singing us a mere song. The tear-jerking This Old Man And I, the title track of the debut EP, is a tale that feels like it should have been written by someone with far more life experience and heartbreak than young Jordan. 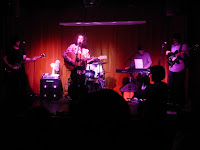 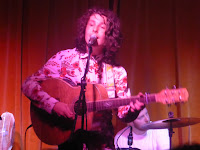 Tears In My Gravy tells a story of a man on death row looking back at his life as he has his last meal (the gravy a particularly Northern touch) and it's clear that he's no run-of-the-mill songwriter, whether it be in his mid-set solo songs or backed by the quality band that he's put together to support him. They add to the songs without diluting Jordan's position centre-stage.

What also shines through is Jordan's personality, joking about a song called Paul being about his uncle, using an instrumental moment in a song to tell us he's forgotten that it's a song off his new EP. With some new songs already in the set alongside those from the two EPs, he's a young man with a great deal of potential and hopefully a big future in front of him.