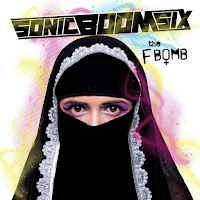 Sonic Boom Six have performed headline tours of Europe, America and Japan as well as slots at festivals including Glastonbury, Download, Sonisphere and the main stage at Reading and Leeds Festival. They come from Manchester but stand apart from everything else hailing from the city. SB6 have touches of ska, punk, pop and dubstep to their sound. Although they have been around for over a decade, The F Bomb is my first point of contact. On a first listen, their 5th long player is an infectious blend of grooves. With subsequent plays, it sounds almost timeless.

No Man No Right is a solid enough ska influenced opener before From The Fire To The Frying Pan takes over - a pounding bouncing baseline dictates the pace, set against vocalist  Laila K’s sharp lyrics. Do What You Want To Do is even more infectious and is my pick of the album - opening with a sample of Dexy’s Geno, what is there not to like?

Train Leaves Tomorrow is the most stripped back song on the album and is a classic slice of pop in the style of St. Etienne. L.O.V.E yet again takes them in another direction. This time it's disco.

The F Bomb is a refreshing, upbeat melting pot of styles and grooves. They almost create as much bounce as Reverend And The Makers. This album is a superb summer record and should see Sonic Boom Six cement their reputation as festival favourites. Tracks like Drop The Bass are ideally suited for a festival crowd.

Across The F-Bomb’s ten tracks, they tackle the hotly-contested subject of female identity head-on, through missives on body image, immigration, gender politics, and domestic abuse. A second CD features on the deluxe version and features a high energy, punkier band captured live at the band's Norwich show from November last year.

The band are on tour calling at: