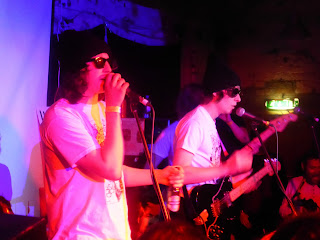 Cabbage are ready to rule the world, but is the world ready for them? The most left-field of potential next big things are only six months into existence, but already they're packing out venues and creating a buzz about them that's almost unprecedented. Their latest sold-out Soup Kitchen show threatened to degenerate into chaos at times and ended with them on stage in adult nappies, but merely confirmed then blew apart everything we already knew.

Coming on stage in white shirts, shades and black hats throwing cabbages and inflatables of David Cameron into the crowd is a way to make an entrance. You only need to take a look at some of their song titles - Indispensable Pencil, Necroflat In The Palace, It's Grim Up North Korea and Terrorist Synthesiser for starters - to realise this is a band that doesn't play by any rules and is making their own up as they go along. When they come armed with banners that declare "I Was Born In The NHS" and wave around the station sign from Mossley station, you might think they're completely bonkers. But you'd only be half-right.

What Cabbage have is songs. It's Grim Up North Korea is a brilliantly mental seven and a half minutes that feels like it's kicking off a revolution whilst the crowd attempt a coup d'etat on the lone security guy who's brave (or stupid) enough to try and placate them during the likes of Kevin and Dinner Lady from their recent debut Chou EP. Those two songs hint with a sledgehammer that there's a side to them that might just make the leap onto radio and bulldoze down the walls that polite society will place in the way of such undesirable ruffians - they'll certainly be their weapons of choice in winning over audiences further afield that this admittedly partisan bunch tonight. 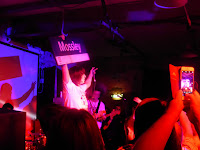 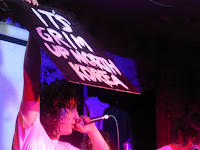 They're not afraid to stick two fingers up at the establishment too. Lies About Manchester is a brilliantly sarcastic up yours to the city's musical past because Cabbage see themselves as the future. Everyone and everything is in their line of fire, but they do it with an intelligence and a directness that might surprise those that don't listen too closely. If you can decipher the words over the cacophony the five of them create, you'll see they know what they're doing and saying and that these are no middle-class art-school revolutionaries. Cabbage are the sound of the streets of working class suburbia kicking back against the mundanity of shit jobs and those that run the country and they're doing it by punching their nemesis straight between the eyes and then stamping on their twitching corpse. 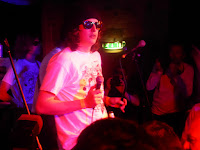 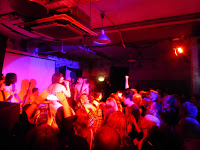 The encore is bizarre, they bound off stage and return complete with support band Brahma Loka with all of them dressed in adult nappies. For six minutes they create a Mossley supergroup, a rampant wall of noise, almost indecipherable, but as absolutely compelling as the rest of the evening has been.

Like the vegetable they're named after, there is no sitting on the fence with Cabbage. You'll either love them for that bitter aftertaste they leave in your mouth and loathe their uncouth assault on your sterile sense of taste. If there's a musical revolution on the horizon, Cabbage will be its leaders.