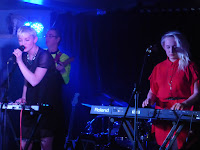 To celebrate the release of their Record Store live album Alfresco, Section 25 set off on a mini tour of Hebden Bridge, Manchester and London. We caught them at their Factory 251 gig on Friday night.

In an alternative universe Section 25 would be feted in the same way some of their Factory contemporaries are. Songs like Beating Heart, Looking From A Hilltop and Dirty Disco, all present and correct tonight, should have classic status. Tonight, despite Factory's typically appalling sound, they still sound fresh and vibrant, brought into the 21st century by the electric combination of Beth on lead vocals and Jo on keyboards. Were this a band without history, with a record label and a press machine behind them then they would be packing out much bigger halls than this. 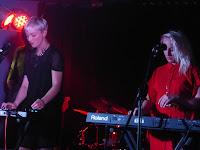 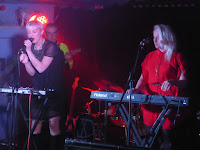 Section 25 aren't just about reliving the past and commemorating what's gone though. Their last album Dark Light, from which they played three songs - the stunning lead single Colour, Movement, Sex and Violence, a stripped down My Outrage and the uplifting Memento - was one that would be championed by the press if it had been by a new band. They're big electronic anthems that the likes of Chvrches would kill for. Beth is a real jack-in-a-box leader of the band now compared to her shyness when she first stepped into the shoes, dancing in the instrumental bits, joking and laughing with Jo and the audience between songs.

It's a weird gig in many ways, there should be far more people here to celebrate this band, but there's still a lot of love in the room and those that are here fully appreciate not just what Section 25 have been but what they are now, which is a great live band that can still release songs true to their legacy whilst sounding contemporary too.

Section 25′s official website can be found here. They are also on Twitter and Facebook. They released a live album Alfresco on clear and black vinyl (with free CD) for Record Store Day.