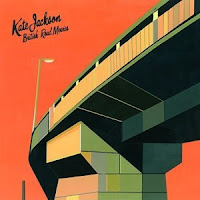 Eight years after the dissolution of The Long Blondes, British Road Movies finally sees the long-awaited return of Kate Jackson to the music scene with an album that's taken that long to come to fruition. It's more than worth the wait though.

In the post Britpop turn of the century downturn in the UK music, The Long Blondes were a shining beacon, their art-school glamour, nonchalant chic a counter to the swathes of bandwagon hopping one hit wannabes. Led by Kate Jackson, they were effortlessly cool, they sang of twisted imperfect romances, running away from home and name-checked fifties and sixties style and music icons. They were the perfect alternative pop band at just about the wrong time. As they split up following chief songwriter Dorian Cox's illness, the world waited for Jackson's next move - surely such a charismatic and engaging front woman couldn't be lost to the music world, but, an odd single and some smuggled out demos with Bernard Butler apart, she went quiet. Until now that is and British Road Movies feels like an album that's not of this time, in a world of its own, unmistakably Jackson's work.

At points in British Road Movies, it feels like time has stood still and all those elements that made The Long Blondes such a refreshing change are also present here, Jackson's voice, half spoken half sung at parts with a penchant for telling her stories with a cool eloquence, hasn't changed too much in the intervening years although age has given it an added richness and depth. Right from the start of the almost six minute The End Of Reason the themes touched upon are the same including the confusion of doomed relationships and romance and the optimism that precedes it and travelling ("carry me with you wherever you go, nothing's going to stop me being with you" - on Homeward Bound or "life changing conversations, I'm in love with railway stations" on Wonder Feeling)  but there's a crispness to the production and mix best exemplified by the layering of vocals on top of each other to stunning effect.

Bernard Butler, who has been working on the project for several years, is notable by his presence here - his guitar work on the likes of Metropolis, Atlantic and Wonder Feeling provides the perfect backdrop for the more upbeat moments of the record. There appears to be a trend to set albums to film these days and British Road Movies is one that you feel would benefit from that treatment, the lyrics to each song feeling like they're a mini epic story in their own right.

16 Years sees a fabulous volte-face, a tale of a lost love refound, half-spoken in the verses and a chorus where Jackson's pronunciation of the words is absolutely crucial to the effect on the listener. The tender Last Of The Dreamers and Velvet Sofa From No 26 continue that approach, both so tender and emotionally raw that they're slightly unsettling to listen to.

British Road Movies feels like both a natural progression from The Long Blondes, the sound of someone striking out on their own but with an umbilical chord to it still attached, not surprising as these songs have been written over the past eight years. Jackson's personality is stamped all over of it of course, that love of quintessential romanticism, the obsession with travel and a simple honesty and openness that runs through British Road Movies making it an album that it's impossible not to warm to and eventually fall for.