She Drew The Gun - Interview 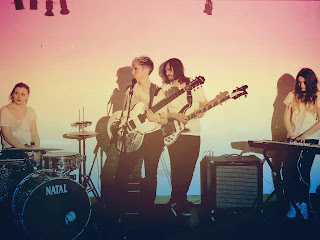 Memories Of The Future is the debut album released by She Drew The Gun earlier this month and looks certain to be near the top when we come to do our end of year polls for 2016. We caught up with Louisa for a quick chat at the end of her recent album promotional tour.

When you started She Drew The Gun, the first time we saw you it was just you on your own. Can you introduce the band and how you started working with them?

The first person I started working with Sian, not long after I'd started working on my own. I always played on my own, but Sian would come and do the odd gig when she was around. We started having a few jams and she came in on a few recordings that I was doing when I very first started.

Later on when I started getting involved with Skeleton Key that's when Jack got involved with the band. We went on an acoustic tour together and Sian couldn't always come so we played with whoever was there. It was always open to other people being involved and having an input.

When we'd finished the album, we needed to recreate the full sound of it so we definitely needed another person and that's where Jenn came in. The band has sort of shape-shifted and evolved to where it is now. It's a nice four-piece band now.

She Drew The Gun is an interesting name. Could you tell us a little about the origins of it?

I just spent a while trying to think of band names even though I didn't have a band at the time. I was just thinking of something that could grow into whatever it wanted to be. I always wanted to collaborate, whether it was with musicians or visual artists. I thought I'd give it a band name and see what happened. After throwing a few names around I came up with She Drew The Gun and I can do a lot with it visually and the gun is quite a powerful image and a powerful thing in our culture. I thought it was quite cinematic so I went with it.

The album Memories Of The Future came out last week.  What was the thinking behind the album title?

I was reading a bit of Kurt Vonnegut at the time, the novel Slaughterhouse Five and I'm not sure whether it actually says memories from the future in it, but it definitely mentions something along those lines and it went with some of the ideas in the songs. Some of the songs play with the future, with dreams, that kind of thing so it seemed like a good fit with the themes that were going on. It hasn't got a great ideas behind it, it just fits in with the sci-fi themes of the songs.

Poem is quite a vitriolic attack on government and certain aspects of society that mirrors the thoughts of a lot of us. Was it inspired by a specific event and how do you feel about the response it has generated?

It was inspired by a news article about police in London moving homeless people off the streets because it was supposedly bad for tourism. That was the actual thing that kicked off starting to write it. It was just a poem at the time. I started off writing about that, I kept on coming back to it and more disgust kept pouring out of mine so I kept on going until it was finished.

It was just a poem until I thought why not make it into a song. With a little bit of tweaking it pretty much went into a song once I had the chorus. That was how it came out.

I'm overwhelmed by how much people have responded to it and I think it's a massive compliment. I think it connects with people and it's good to know that other people feel the same way as I do. It's a great feeling.

It's a very different song to some of your earlier singles - Where I End And You Begin and Since You Were Not Mine - and that variety runs through the album unlike so many debuts that have a theme. Did you consciously shy away from creating a record that would allow you to be pigeonholed?

I didn't consciously do it, no, I just wrote songs about what was going on in my head at the time. It could be about absolutely anything, I'm open to writing about anything that I think is an interesting idea or something that's in my head at the time. There's no conscious idea about getting variety in the album, but I'm really glad that there is.

I always wanted to do an album that, I'm going to contradict myself here, was quite eclectic, like Badly Drawn Boy's Hour Of The Bewilderbeast, something like that which has a lot of stuff in it. I'm not saying the album is like that, but I thought that was a good way to do an album. It wasn't that controlled and it wasn't us setting out to do something, it was more let's go into the studio and see what happens with the set of songs we've got.

The album is out on Skeleton Key, which has released the likes of Blossoms and Sundowners and is run by James Skelly of The Coral. How important has that support network of bands been to you?

It's really cool to have bands around that are a couple of steps ahead of you and have done the things that you're trying to do, up to bands like The Coral who've done everything, and be involved in what we're doing. They've got us involved on this tour that they're doing and it's good to see all these bands around that are all at different levels that talk about music and songwriting and support each other. It's a big thing.

You've recently won the Emerging Talent competition for a place at Glastonbury this year.  How excited are you about playing at the festival and what other acts on the bill are you most excited about seeing (and possibly meeting)?

Oh my God, unbelievably excited, I've been absolutely buzzing since we found out. We were on a high for about two weeks afterwards. We're going to do a few different gigs at the festival over the week, but the fact we're playing the John Peel Stage at Glastonbury on the Sunday is pretty damn amazing and I couldn't be happier about that.

Bands that I'd like to go and see. I'm quite excited about going to see Cyndi Lauper, I think that'll be quite a good vibe. She's got some amazing songs and I think the crowd will be well up for that. I've never been to Glastonbury before, but people tell me it doesn't matter what band is on, you just enjoy the whole thing anyway. That's what I'm going to see, but I'm definitely going to try and catch Beck and PJ Harvey, but I'm not sure what I'll catch as we'll be all over the place as well. And Carl Cox, I think that'll be amazing.

What are the plans next for She Drew The Gun now the album has been released?

The plan is to keep going round and playing these songs and see if people like them. I think it's good that the album is out there now and we're getting mentioned by people and put in playlists. It's really exciting to have something out in the world and you can't really control it now as it's out there. All you can do is keep doing the best you can live, putting on a really great show and that's what we're concentrating on at the moment. Writing is always there but we're going to see how far this album can go though and then see about getting in the studio and doing more music.

Memories Of The Future is out digitally and on vinyl and CD.

Our review of Memories Of The Future can be found here.