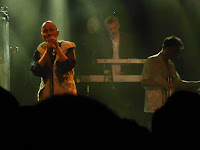 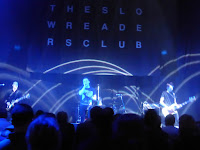 James returned to an old hunting ground Kentish Town Forum (aka The Town And Country Club) for the first of two nights there, supported by Manchester's The Slow Readers Club. The set featured the new album Girl At The End Of The World heavily with a few old favourites and a couple of curveballs.

Opening up again are The Slow Readers Club and it's becoming evident with each night that passes how much more confident they're becoming up on these big stages and, considering they're an unsigned band from Manchester, that's quite a big statement and one that we'd be surprised if we were still making in six months time. They look and sound at home up there, Aaron using the extra space he's granted versus the smaller stages back home to move around and Kurt and Jim both lose themselves in their guitar and bass, whilst Dave's drumming comes to the fore with the crystal clear sound of these venues that allow you to distinguish more clearly between instruments. 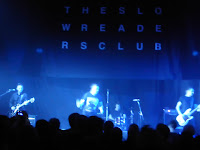 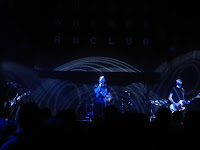 Their set, as we've so often said reads like a more established band's greatest hits. There's no filler in there which is quite astonishing for a band that most of the audience won't have heard before playing a forty minute set. You can hear at the end of each song the level of appreciation growing as the audience recognise that Jim and Saul pulled a rabbit out of the hat by picking a band that they love to open for them. They get a deserved great reception again.

"I hope you've heard the new album" quips Tim as he joins his bandmates on stage and James proceed to start with five songs from the new record. A gentleman near us bemoans that fact and is told (by someone else, not me) that it was number two in the album charts and that he is the one that is out of touch not the band. That success is a justification for playing so much of the new album, but none is really needed, such is the power that James summon with them. Whilst favourite albums can be subjective and ever-changing, this is definitely the one that as a body of work has made the transition from studio to live the most powerfully. I've seen it described on twitter as "chaos and creation, euphoric and intimate" and that pretty much hits the nail on the head. 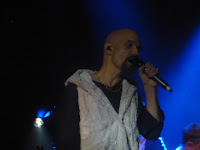 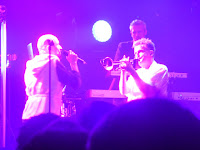 Girl takes no prisoners on her path. You can feel the lift as Move Down South escapes the dropdown and hurtles, always on the edge of breakdown where James' best songs always stand, to its conclusion. The "were you just born an arsehole" punchline of To My Surprise feels almost celebratory rather than accusatory in its delivery as a set of rotating lights bathe us and the stage in beautiful white and Tim loses himself in his own world in the extended middle section of the song. He then ventures down and into the crowd for Catapult, lying chest first across the first few rows before security haul him back.

Tim jokes that Paris Match were meant to be coming to interview him and he was glad that he didn't have to do it in French and explain Alvin to them.  It's a great live song and you can see the band are having a blast playing it, Tim half-improvising in parts and the rest of the band stretching it, taking it to its limits and they do the same with Waking where Andy's trumpet takes centre stage and changes the dynamic of the song in a way that James do so often as a live band.

Ring The Bells sounds absolutely huge - whilst Sound is still rightfully a crowd favourite, this would have been the sensible choice to follow Sit Down back in 1991, but then that's never been how this band works. Sometimes gets a delirious response and feels revitalised having been surgically removed from the encore and the pressure of generating a singalong taken off its broad shoulders. 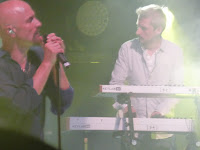 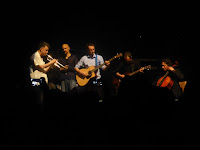 Bitch and Surfer's Song ("about dancing on the edge of a volcano" Tim tells us) take us back to the Girl and these are two of the most powerful songs live and get possibly, Attention excepted, the best response of the new songs. High energy, octane fuelled, they are the sound of a band of lesser vintage, thrilling in their execution, brimming with electronic threat and savagery and plenty of scope for Tim to lose himself completely in the music. Come Home makes a return to the set for the first time on this tour and it's a fascinating contrast as it reminds us that the raw energy and excitement that these new songs are creating is exactly what propelled James into the wider conscience in the late eighties and early pre-SD nineties.

They're still working on the right arrangement for the title track from Girl and it's fascinating to see it every night done differently as they strive for perfection, to challenge themselves with the song. One Of The Three is simply beautiful in its delivery, the instrumental opening section setting the hairs on the back of the neck up on end as the notes shoot right through you. The sound on this tour so far has been simply stunning as have the lights and it's easy to underestimate how both of these impact on the performance and the audience's experience. 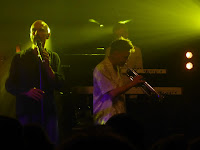 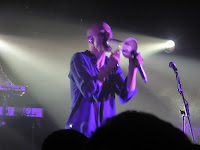 The acoustic session sees a front of stage huddle, Jim and Saul almost eyeball to eyeball for She's A Star and Just Like Fred Astaire. The audience had been very receptive to the new material, but there's naturally a stronger reaction to old favourites that they've grown up with. This set up is intriguing though and Adrian on cello adds a completely new dimension - it'd be great to see them experiment more with this during the rest of the tour and possibly arrange other songs this way.

Interrogation makes a welcome return to the set.  Always one of, if not, the highlight of the La Petite Mort songs live, it's wrought with restlessness and self-judgement and has a breakdown that turns the song on its head like so many of the best songs. As with Girl, Dear John feels like another song that they're searching for something, but it's fascinating to watch them doing that in front of us as it has a different feel to it every night as a result. In the soundcheck Tim told us about a completely different set of lyrics for that song, which Saul challenged him to sing one night - we'll see about that one.

The trio of songs that end the main set simply blow the audience away though. Honest Joe isn't a song, it's a multi-headed beast, an explosion of sonic experimentation that only works in the live environment where lights collide with sound and trumpets duel with violins and keys. Tim's megaphone breaks so he takes Saul's and the show goes on. It's the side of James that those schooled on a series of 1990s hit singles would never expect. Sound is one of those singles, but it's so far removed from that four minute radio edit that hit the top ten that it could well be a different song. They finish off with Attention which, like so many of their very best pieces of work, feels like multiple songs rolled into one - a slow build into the moody, haunting middle section before bursting into life with tales of fire ceremonies in the Topanga desert. For a band with so many songs that could fill this slot, it feels like the absolutely right final song. 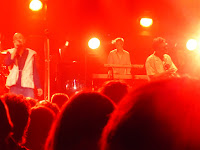 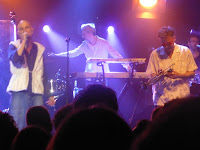 There's no Sit Down to start the encore tonight, but Tim isn't going to be denied his walkabout, jumping off stage, hurdling a barrier to the stairs leading up to the balcony to the bemusement of the security guard in charge of it before traversing the crowd in the seats and coming down the other side. Nothing But Love and Moving On are switched around - an interesting contrast between the power of love and the pain of loss, but testimony to the fact that James are still creating songs that can stand up against the weight of their history and be as adored by a crowd that grew up when they were making that history.

The Slow Readers Club played Fool For Your Philosophy, Sirens, Start Again, Days Like This Will Break Your Heart, Don't Mind, I Saw A Ghost, Feet On Fire, Forever In Your Debt, Plant The Seed and Know The Day Will Come.

James played Move Down South, To My Surprise, Catapult, Alvin, Waking, Ring The Bells, Sometimes, Bitch, Surfer's Song, Come Home, Girl At The End Of The World, One Of The Three, She's A Star, Just Like Fred Astaire, Interrogation, Dear John, Honest Joe, Sound and Attention with an encore of Say Something, Nothing But Love and Moving On.