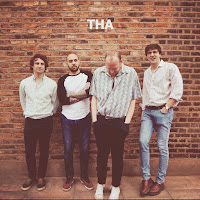 Rant Wildly is the new single from London four-piece Those Handsome Animals. Like their previous offering Do Wrong, it's been recorded live to tape with Cribs' debut album produced Ed Deegan. As a result it delivers a massive raw punchy kick to the guts.

The song deals with the frustration of living in a modern city - the decisions of whether to go out at night and spend a heap of money or stay in and regret being bored / boring in the morning, the sort of decision we all have to make. Musically, there's some serious guitar work going on with two of them fighting for position as if their lives depended on it, which creates that ferocious rhythm that runs through the song.