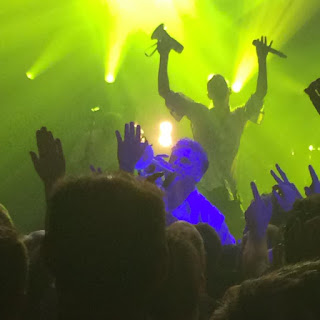 Night two at Kentish Town Forum meant a new setlist, more surprises and some inspired improvisation from James in front of a fervent sell-out crowd. Still heavy on Girl At The End Of The World but with something for everyone including a couple of resurrected favourites, James left the audience wanting much more. Support came from The Slow Readers Club who are blossoming on these expansive stages.

These are heady times for The Slow Readers Club. An unsigned band from Manchester hand-chosen by Jim Glennie and Saul Davies from James for the majority of the dates is something out of an aspiring musician's dream, but in this case that's turning into reality and you suspect that they won't remain unsigned for very long. There are already people around the hall singing and dancing along to Start Again and there's plenty more you can see being bowled over by them as the set progresses and the queue at the merchandise desk at the end tells its own story. That nervousness of the first night has gone - or if it's still there it's well-hidden. They look and sound like they belong here - their songs big enough and anthemic enough to reach to the farest corners of this beautiful theatre. 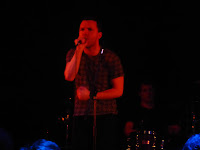 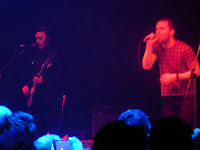 They introduce One More Minute into their set tonight to replace Fool For My Philosophy with Start Again moving to opening duties. It's a song, like so much if not all of their set, is made to fill indie dance floors the country over, far more than so much of the insipid four boys with mummy and daddy's guitar that passes for alternative culture these days. Aaron's using the bigger stages far more now than he did even earlier in the week and that just adds to the impact of the likes of Don't Mind, I Saw A Ghost, Forever In Your Debt and Plant The Seed. If you're doing any of the remaining shows and you're fortunate enough to have them supporting you need to get down early to catch them because they're something special, and if you don't believe me ask Jim and Saul.

Bitch is a great opening song to the both the album and a live show. You suspect it hasn't opened before because it is an obvious choice and James try and avoid the obvious choices as tonight's set proves yet again. It allows Tim to come on stage after the rest of the band have created a fanfare for his arrival, the smouldering potent two and a half minute intro building the anticipation in an already sweltering venue before he's even sung a word. It's a marker being laid down for the rest of the night, but one that the other songs clamber to meet. The accusatory chorus of To My Surprise is turned into a joyful thing, thousands singing back "were you just born an arsehole" to a sea of white lights exploding behind the band. Tim comes down and joins us for Catapult, dodging mobile phones being waved in his face, almost dropped as he ventures on to rather than in to the crowd. 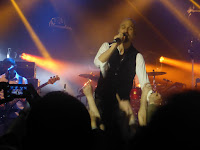 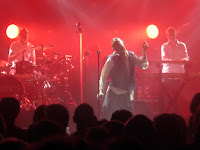 Alvin is a song that has probably divided fans more than any other on Girl. Its made-up French lyrics and the stardust style frivolity of the tune make it a wonderfully playful two and a half minutes, a world away from the dark introspection of some of the lyrics on the last record La Petite Mort, but a sign of a band that's ever changing and evolving and one that wants to have fun. Waking, with Andy's trumpet far more to the fore than the album version, evokes a similar response. Girl is very much an album to experience live as well as at home, far more so than probably any other James album ever.

The anticipation that's been building in the crowd is released by Ring The Bells and Sometimes. The former ends with Andy's trumpet fighting its way through the sonic madness that propels it through the breakdown to its triumphant conclusion whilst Sometimes feels invigorated when stripped of its formal duty of ending the set with a communal singalong. The lights and sound are, it has to be said, the best on this tour I've ever seen - how they manage it when these songs are being played differently each night is a mystery, as if that magical connection the seven (eight with Swiss Ron) have is being shared across some top-secret invitation-only wireless network.

Move Down South is a case in point, the orange lights and the fog effect it creates feels like the perfect setting for the music to break through it as the band's voices come together for its almost evangelical denouement. Girl itself feels like she's finally found her feet, taken over her high heels and put some proper shoes on, lit up by a backdrop of stars as the song reaches its euphoric ending. 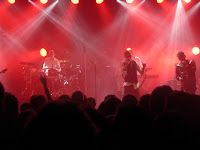 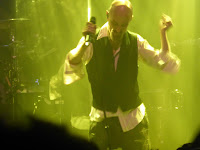 "This is one for the old faithfuls" says Tim as the opening chords to English Beefcake strike up. For a band that, by nature of its age and history, has been often tagged alongside heritage bands either simply turning up for a pay cheque to recreate their Madchester / Britpop albums in full, it's telling that they see this a song for their old hardcore when it came out after their two arguably biggest waves of popularity and within the second half of their lifetime as a band such is their focus on the new. It's a sign too of how they moved on from that - it's a song of two sections, probably from two different jams, that they fused together to create something far more than the sum of the parts, Tim losing himself on the journey that his mates plot ahead of him before they all come together as one at the end.

The drums drop straight into PS and a moment of real magic happens at the end of the song where Saul's violin and Andy's trumpet meet centre stage for a duel in white light and Tim starts to improvise lyrics on the spot. Normal bands just don't do this, but then despite some people's expectations and prejudices, James are nothing like that.  Tim does need to tell those people to shut up as he introduces Feet Of Clay as "from the heart, a message from our sponsor." It's the moment where Girl shows its more tender side in the middle of her story. Five of them - Jim on his beautiful looking and sounding acoustic bass, Saul on acoustic guitar, Andy on trumpet and Adrian on cello and Tim - huddle centre stage and She's A Star feels even more poignant and powerful than ever before in this half stripped back mode.

But it's only an hors-d'oeuvre for what comes next. Without looking back, the last time What For was played live at a gig in my memory was 1999 (excluding soundchecks). It was the hit James single that was born in the wrong time and place. Had it been birthed four years later when Seven was being recorded, things might have been very very different. I'm not sure whether the audience all know it or whether they're just carried away by the moment it creates, but the Forum becomes a sea of clapping hands, Tim loses himself in dance slightly set back from the other four who feel like they're ad-libbing it in parts but it's exactly that feeling that makes it one of the most memorable moments at a gig for a long time. They can't start the next song until the audience stop their prolonged applause at the end. You almost feel sorry for Dear John having to follow that, but like Girl it's a song that's finding its own way now, only the bottom half of the stage is lit which adds to that growing in menace electronic backing to the track. 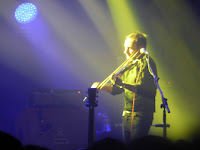 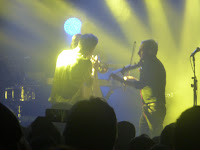 The final trio of the songs in the main set are like the apocalypse coming at you full-pelt with nowhere to shelter. Honest Joe, Sound and Attention are far more than songs; each one breaks free for the borders of what you would define as one, structures are thrown out of the window and replaced with an amorphous mass that devastates everything in its path, growing bigger as they envelop and encompass anything left in their wake. It's also telling that of the three, the by far best known one, Sound, majestic and swaggering with its badges of having been the show-stopping moment of so many shows, actually feels a little overwhelmed and outmuscled by megaphone duelling, strobe channeling madness that is Honest Joe and outmenaced by the brooding Attention despite the moments where the lights work in perfect tandem with Dave's drum beats. But if you can show me a more powerful set of three songs to blow away an audience at the end of a gig, then I'm all ears. 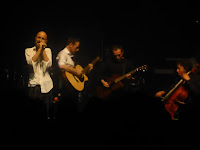 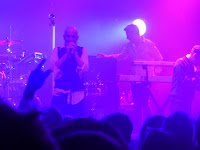 Say Something starts with Tim and Adrian (not that half the downstairs audience can see) up on the balcony for an acoustic version of the song where we assume he wanders through the seated area before making their way to the stairs, where Tim gracefully holds the gate open for Adrian whilst still singing. He lingers at the bottom whilst Adrian gets back to join the rest of the band as they bring the song up with all seven of them for a final chorus.  They finish with Moving On and a triumphant Nothing But Love with the stage bathed in orange light before being called back by an insistent crowd for a frantic, adrenalin-propelled Tomorrow that leaves those wanting an ending they know sated and the whole place a little warmer and sweatier than even before.

The Slow Readers Club played Start Again, Sirens, One More Minute, Days Like This Will Break Your Heart, Don't Mind, I Saw A Ghost, Feet On Fire, Forever In Your Debt, Plant The Seed and Know The Day Will Come.

James played Bitch, To My Surprise, Catapult, Alvin, Waking, Ring The Bells, Sometimes, Move Down South, Girl At The End Of The World, English Beefcake, PS, Feet Of Clay, She's A Star, What For, Dear John, Honest Joe, Sound and Attention with a first encore of Say Something, Moving On and Nothing But Love and a second encore of Tomorrow.