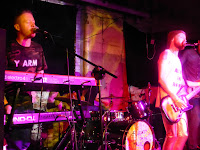 Heavy On The Magic are a curious bunch. Formed out of the ashes of political punk band The Minx, they're much more atuned to pop music than their predecessors but without losing any of that witty observation of what's going on around them. They don't fit in any boxes, conform to any pattern, yet they're not weird or inaccessible either and they're becoming a great live band in the process.

In a city where front men are often as focused on image as they are on the music, Chris Haddon is a brilliant anomaly - his beanie hat hides what's left of his ginger hair, he's wearing gold shiny pants that look like they've been painted on and a vest that displays his tattoos and a logo that says "All Hail The Bin Men" and he never stops moving (or talking when the band's not playing). But rather than this be all a bit odd, he's one of the most energetic, thrilling and enthralling front men in the city today.

His band make sure it's not a one man show though. The sound of the new band, in particular their most recently written songs, are much more focused around Kieron's keyboards and employ the use of backing vocals far more heavily than their first songs and the previous band for most of them, almost creating a pop/punk genre of their own in the process. Opening song Don't Do That is the sound of a nagging mother (not Chris's, she's in the crowd and is lovely) repeating a series of instructions on what not to do to their child - simple in theory, brilliantly effective in the impact it has. The vest is explained by a song with the same title and the reasoning in the chorus is because we're too lazy to get out of bed to do it ourselves - a strange lyrical subject for a song but one that somehow works. 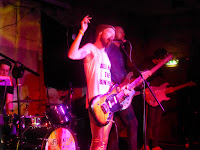 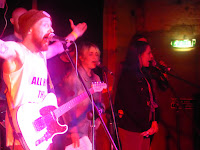 The newest songs are the ones that really stand out though - Hoo Ha I Love Ya is a wonderful joyous fun romp, whilst Hot Day is another one that shows them spreading their wings musically. Heavy On The Magic don't take themselves too seriously most of the time and the result of that the gig is a joy to watch. They get their friends Foxtales up to sing the mischievously titled Sinkin' Thinkin' and finish it with their national anthem Weed Smoking Hippies Are Going To Rule The World. They may never rule the world, but they're always going to be heavy on their own wonderful brand of magic.