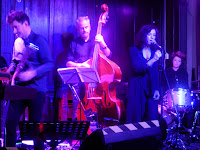 Sometimes random gigs are the best. I’d never heard of John Metcalfe before tonight, my Factory knowledge not stretching enough to know he was a member of Durutti Column but before a packed music room in The Castle, we witnessed a fabulously varied set that mixed electronic trickery with real instruments and the stunning voice of Rosie Doonan to create a thoroughly enthralling show.

Even before the show starts we’re intrigued, there’s a huge bank of keyboards and a Macbook stage left, a violin, a guitar, a double bass, a set of drums and a microphone. To start off there’s three of them on stage, John himself, Aly on double bass and Daisy on drums.  What reveals itself as the set unfolds is a clever use of the technology, looping, backing tracks, but also a delicious subtlety to the way the instruments are used. The violin pierces the warm night air, dancing in tune with the double bass and the drums kick in at the right moment as a means of changing the mood of the piece.

Much of the set doesn’t have words such as the penultimate track The Arrangement where John instructs all lights to be turned off and the song is played in the dark, mysterious brooding with the chilling threat of something unspecified hanging in the air, never overstated, just hanging there unsettling and absolutely entrancing. There’s no chatter at all as you often get at shows like this because everyone is enthralled and desperate not to miss a single detail in case the aural collage is shattered by doing so. At points Rosie joins the stage in these more atmospheric moments and adds single words, such as fly and sky sang with different note lengths in parts of the songs, but again every single nuance feels like it adds something vital to the performance. 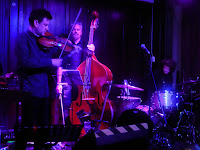 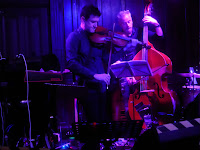 There are more traditional song structures in the set too and this is where Rosie comes to the fore. There’s one song, we think it’s Plain To See, that reminds us of Portishead where her smoky vocals recalls Beth at her finest, but in others she thrills us with the range of her voice that works in perfect symbiosis with the music that the other three are creating, Kite and Flood Tide being further examples.

As we said at the start, sometimes surprise gigs where you have no expectations or preconceptions can turn out to be the best. A John Metcalfe gig is very much a listening experience, you need to go in and immerse yourself in what he’s doing, what he’s creating and you’ll be rewarded with something of absolute beauty.