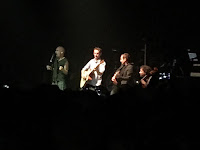 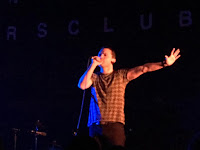 We're back on the James tour after a few dates off and next stop is Llandudno, a beautiful seaside town on the North Wales coast that seems mostly untainted by the cataclysmic decline of so many similar places. Support came from Manchester's The Slow Readers Club.

These bigger stages are starting to feel like home for The Slow Readers Club now and it's a pleasure to witness them blossoming before our very eyes and to witness the incredible responses they're getting for a band that the majority of the audience have never heard of before let alone listened to. It's no real surprise though when you consider the set they've got to present - tracks from their debut album such as Sirens, Feet On Fire and the magnificent One More Minute are freed from the production shackles of their recorded versions and fill the hall in the same way their hosts' classic songs do a couple of hours later. Then you have their most recent singles - Forever In Your Debt, Don't Mind, the set-opening Start Again, I Saw A Ghost and Plant The Seed - that have exactly the same effect. 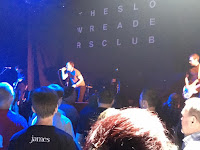 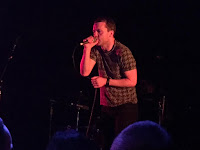 Whilst we might repeat ourselves saying this, the band don't. Each song has a life and personality of its own whilst retaining a connection of varying strengths to a sound that makes them stand out. As well as sounding like they belong in these halls, they're now starting to look it, the confidence of a thrilling response at three sold-out London shows giving them that further boost. There's a moment where Aaron moves towards brother Kurt, their eyes meet, and both smile and then turn back round - it doesn't look much but it means a lot. The audience's reaction at the end of the set tells its own story - that "small unsigned band from Manchester" feel like everything but that.

The Slow Readers Club played Start Again, Sirens, One More Minute, Days Like This Will Break Your Heart, Don't Mind, I Saw A Ghost, Feet On Fire, Forever In Your Debt, Plant The Seed and Know The Day Will Come.

This is James' first time in Llandudno and hearing accents in the crowd it feels like there's a mix of locals and those that have made the trek across the border from Liverpool and Manchester for the show and a day at the seaside. Those that attended the VIP soundcheck got the extra-special treat of them effectively busking a version of Burned from 1989's One Man Clapping live LP when an audience member asked them a question about the song - it's been played once in 25 years.

It's therefore an even more challenging set for this audience that it might be in towns and cities where James have played before many times, particularly when they start with four songs from the new album Girl At The End Of The World, but the response at the end of opening song Move Down South tells the story that the acquaintance has already been made and they're on first name terms. To My Surprise is a revelation live, it's blossomed with a stunning stretched out middle section where Andy Diagram's trumpet is king and Tim is down on the barrier for the first time of the night and a stunning light show that matches perfectly the playful questioning of the chorus as the 2,000 assembled ask the question "were you just born an arsehole?" Sometimes some of the weaker songs off an album have lost their place in the set this far into a tour, but the Girl songs have dug their heels in and aren't going anywhere and there's no reason why they should. 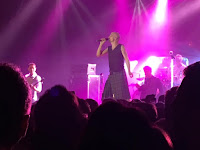 Alvin is another case in point. Tim tells us he doesn't know why he wrote it in French because it's impossible to learn, but it's one of those James songs that the band take away and twist and turn into something that almost doesn't need them such is the uplifting joyous sound that they create. Surfer's Song has been one of the highlights of the new songs, that incessant forward propelling motion that runs from its start to finish perfect for a live show in a big sweaty aircraft hanger like this.

Ring The Bells and Sometimes provide light relief for those that haven't yet got to the new album. The stage is lit in yellow, Tim lost in dance as Bells sends the hall into a wild frenzy whilst Sometimes is a little more composed in its nature and sees us all joined as one in declaring that we can see your soul with something that approaches religious fervour.

Bitch is a big song, possibly the strongest statement on Girl of where James are at the moment. The fact that Tim doesn't sing for the first two and a half minutes gives him a brief respite, but he's too tied up in the moment not to dance around the stage as his bandmates create a brooding, menacing backdrop. It has an immediate and very marked counterpoint with the next track PS though as if the band are toying with us, moving from one sound to the next with no thought for continuity like the best random playlists always do. As the song melts the hearts that minutes earlier were beating close to bursting point, the stage is lit in yellow, lights focus on Saul on violin and Andy on trumpet as the other instruments drop down and Tim improvises some lyrics about following footsteps and fire. 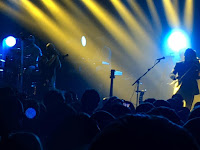 "This is a song about getting dumped" is the deadpan intro to Dear John, a song that's now beginning to really flourish live, a slow burner that's possibly not as robust as those songs around it on the record when played live, but one like a butterfly that shows its wings late is developing into the most beautiful of the lot. The title track from Girl similarly feels like they've got it nailed down where earlier in the tour they were searching.

They congregate centre stage for the two-song semi-acoustic set and as the opening bars to She's A Star strike up and the crowd realise what it is we have seven minutes of the band almost being drowned out by the scale of the reaction and the singalong to that and the "unadulterated love song" that is Just Like Fred Astaire which follows it. Saul describes it as "a bit mad" but that would be downplaying the connection that has been made.

Señorita makes a welcome return to the set. It's a song that (for some unknown reason) the people of Greece have taken to their heart and it probably would have been a single here at some point had Pleased To Meet You gone its full promotion cycle as the band disbanded in 2001. It wouldn't feel out of place on any James Best Of / singles type record and tonight it proves that point. Tim goes down on the barrier again, a brave move for a man wearing a kilt, although he does resist crowd-surfing. 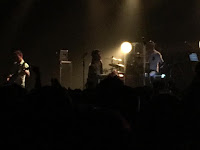 Honest Joe, Sound and Attention appear to have built foundations at the end of the set and are refusing to budge. They're three songs where James show a very different side to the one that most people will know them for. Honest Joe came from the improvised Wah Wah sessions and its genesis is very evident in its lop-sided structure that allows the band to improvise around it, take it to the very extremes as drums and keyboards collide and scrap it out with Tim and Saul's duelling megaphones.  Sound is a little more controlled and defined in its make-up, but that doesn't prevent them stretching its skin to the very limits of its elasticity. The crowd join in with clapping as the song is taken down waiting for someone to pick up the baton and drive the song to its conclusion. Attention is the new kid on the block but has that cocky confidence of youth, the Marcus Rashford or Kelechi Iheanacho of the set, that means it stands toe to toe against the heavyweights it has displaced at the end of the set and makes it immovable. The tension in the air is palpable as it stops then slowly builds back up before exploding into life with spectacular results.

A familiar sounding set of chords on a mandolin come from the back of the hall as the encore starts and Tim goes walkthrough, interrupted on his path by a "dickhead who can't respect space" who grabs him and scratches him as he walks by. It'd be a shame if the actions of one idiot caused him to stop doing this, but it's a real risk. The rest of the band come in as they continue their journey through the crowd to the stage and the last chorus has everyone singing along all for one.

We've felt Moving On has been a little flat on some of the dates on the tour compared to what's been around, but we have no such qualms tonight. Aided by beautiful white and purple lighting, it has that lift that kicks in with the chorus that makes it feel like a transcendental call to those departed and manages the mean trick of sounding both intimate and poignant whilst filling a room of this size.

Nothing But Love feels like a celebration of what this is all about, its radiant positivity a message that the good will always come out and win the day. Llandudno becomes a sea of hands and a wall of voices joined as one. No one is going anywhere though and the band come back out for Say Something which sends the hordes out of the doors singing the chorus of a song that, despite not being one of their most inventive, is always guaranteed a hugely powerful response because of the undeniable connection that it makes.

James played Move Down South, To My Surprise, Alvin, Surfer's Song, Ring The Bells, Sometimes, Bitch, PS, Dear John, Girl At The End Of The World, She's A Star, Just Like Fred Astaire, Señorita, Honest Joe, Sound, Attention with a first encore of Sit Down, Moving On and Nothing But Love and a second encore of Say Something.