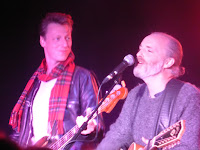 In support of their new album Everything At Once, Travis played an intimate five-song set up at the top of HMV's flagship store on Oxford St in London before meeting with fans, taking selfies and signing everything and anything. We went along to catch them mix some of their best known classics with some of the new material which they see as the best of their career.

Travis are very much a band of the people. Some may look down their nose at them for being a band that hasn't pushed the boundaries of what they do, "a singles machine" as Fran says at one juncture, but to dismiss them in that way would be missing the point. Travis have always written uplifting songs that you'll find yourself singing in your head for reasons unknown because they manage to hit exactly the right chord. They're also a great live band with plenty of audience interaction with Fran being a real raconteur of stories that pop into his head.

Before they even start Fran explains us to why Travis are back. The band have become fathers in the intervening years since the height of their popularity and have become more geographically dispersed at the same time (Fran is heading back to Berlin immediately after the set), but now their children are past their early years, they've come back to the band with their 2013 album Where You Stand being what Fran called them reacquainting themselves with each other before Everything At Once being a two year labour of love.

They start the set with an oldie though to usher us in gently. Turn reminds us of their songwriting guile and craft, but it also prepares us for what comes next with recent single 3 Miles High. There's a direct line of genesis running between the two - whilst the songs don't sound the same, their impact is consistent - a hook that grabs you and doesn't let go and a chorus that's so brilliantly simple in its execution that you wonder where they pull them from. 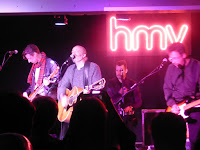 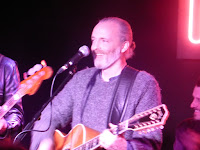 Driftwood and Why Does It Always Rain On Me follow and it's great to hear the latter away from the context of a traditional gig-closer. Like so many bands' biggest hit and most recognisible song it's lost a little of its magic by over-exposure, yet the stripped down version they perform today takes the song back to its core and the reason people fell in love with it in the first place. It's one of those moments that musicians dream of where they make a song that genuinely connects. Everyone around the room is singing along under their breath and you can feel the love.

They finish with Magnificent Time, the most recent single from Everything At Once, and proof that whilst age might have calmed them down, although Fran's tales of a late night wetting the album's head might suggest otherwise, they haven't lost that ability to write songs with mass appeal. There's a few strange looking dances going on (which might be from the video - which we haven't seen), but it's a strong calling card to an (admittedly) partisan crowd that they're here to stay.

They then hang around and sign everything and anything, pose for photos, discuss the merits of octopus after Fran's appearance on Saturday Kitchen and bond with their fans. Fran makes a point of greeting a girl in a wheelchair on the way on to stage and talking to her at the end and ensuring she got photos and every band member asked every fan their name - small things perhaps, but things that a lot of bands forget or aren't interested in doing. There's always a place for Travis and the way they make people feel good - it's great to have them back.

Email ThisBlogThis!Share to TwitterShare to FacebookShare to Pinterest
Labels: Travis