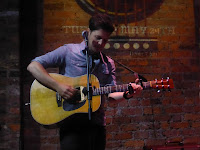 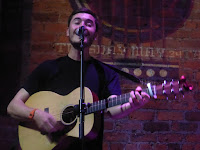 One of Manchester's hidden unexpected gems as a gig venue, Texture, played host to a fundraising gig for Gorton's Rushbrook Academy, a primary school situated in area with one of the worst deprivation rates in the country.  Dave Fidler and Liam McClair played solo sets and the school held an auction for signed Elbow memorabilia in order to raise funds for several school projects.

Liam McClair opens the evening's proceedings and he very quickly charms the audience into silence for most of his set, no mean feat given the usual ignorant chatter that often accompanies singer-songwriter solo sets in Manchester. It's a mix of his personality, a slightly mischievous boyish charm, and his songs that allow him to do so. He takes time out to explain what each song is about, often with a witty anecdote such as telling us he's not on commission for sales of the book The Alchemist which his opening song Alchemy is based on, and encouraging audience participation on Lose My Faith, Cowardly Man and Honest.

Stripped back from the band set-up he's playing with regularly these days takes nothing away from the songs, all six of them elegantly and eloquently crafted with lyrics that people can relate to and delivered in a style that makes you warm to them. As people clap along politely in line with Liam's instructions, you feel he's won over an audience that knew little about him before and that's a massive success for any musician whatever level they are operating at. 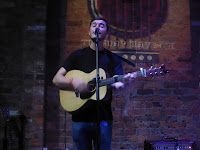 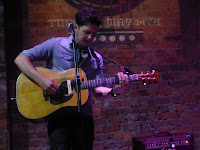 Dave Fidler is a different type of artist to Liam. He describes himself as a blues guitar player and there's points in the set - such as the opening bars of his first song Taking Over and the instrumental Tommy where this really comes to the fore. However, the crystal clear and crisp sound really lets his guitar playing shine through during the whole of his set. He's also able to manipulate his voice to match the mood of what he's singing too - the cautious optimism and hope that good will triumph of Love Listens compared to the more sombre reflective A Song For Nico and the joy of fatherhood of Easy Gone Easy Come.

As well as songs from his debut album I'm Not Here, he plays three songs expected to appear on his second album that he hopes to finish writing and recording this year. As well as Love Listens, he plays a song called Can't Stand It which has hints of reggae in it, no mean feat when just armed with a voice and an acoustic guitar and another one that's so new it's not been named yet that show that he's broadening his horizons as he writes his second record, no doubt armed with the confidence of the feedback he's received on the road with John Bramwell as well as the ovation that he gets at the end of his set from people blown away by his natural talent that makes this look so simple for the most part.

More information on Rushbrook Primary can be found here.