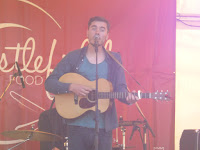 Liam McClair’s appearance at the annual Castlefields Food and Drink Festival was one of the highlights of a rich and diverse musical line-up that celebrates and gives opportunities to some of the best under-the-radar talent in the city at present. With his smooth, highly accessible songwriting craft very much to the fore he charmed an audience enjoying the food, booze and the unusually sunny Manchester weather.

Even with a band in tow now, Liam McClair very much stands out in the mass of singer-songwriters in the current Manchester scene. A lot of that comes through the positivity of the lyrics he sings which portray a hopeful yearning, that things will get better rather than the miserablism (not that there’s anything wrong with that) which so many trade in.  The likes of Honest, Someday and Alchemy with which he opens his short set are perfect cases in point. 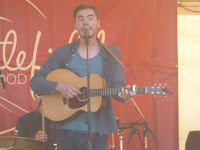 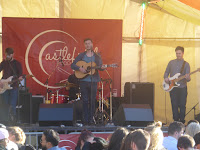 Despite a sound system that doesn’t help him, and half the hipster element of the Northern Quarter having a day out in the sun airing their voices to make themselves heard, the innate beauty of his craft still shines through. His band enhance but don’t overpower what he’s doing either – so often the transition from solo to band doesn’t work, but this is a perfect example of how to do it and how to do it well.

He plays a new song called Fame and one that we don’t catch the title of that has a great guitar solo from Dom Major (another Manchester artist you need to keep an ear out for) that show that he’s got more in his locker before finishing his set with his early single Honey and his latest one Hunted.

Ever engaging throughout with a huge grin on his face as he sings and tells us about the songs he’s playing, it’s impossible not to warm to Liam McClair. The complete lack of pretence and the simple honesty of what he does alone ensures him that. He might still be one of Manchester’s best-kept secrets, but it’s one that we should treasure.