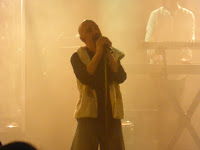 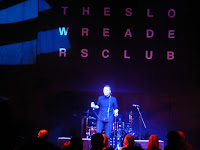 Night two of the Girl At The End Of The World tour sees James and The Slow Readers Club head to the Essex coast and Southend's Cliffs Pavilion. As in the previous night in Bristol, the James set focused heavily on the new album, but as with tradition the order and some of the other songs in the set changed radically from gig to gig.

It's 7.30 by the time The Slow Readers Club take to the stage and it's disappointing at first that so many people in a town starved of live music choose to start the show in the bar although it does fill up considerably as their set progresses. They have some technical problems at the very start which threaten to derail things, but, perhaps emboldened by watching James just shrug them off last night and get on with it, it feels like it just calms their nerves as they start their set with Fool For Your Philosophy. 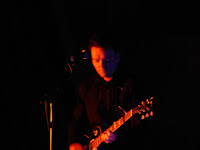 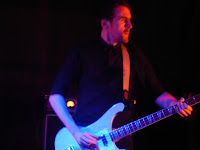 With their brilliant imposing backdrop in place and the confidence that having done this once already the night before they're quickly into their stride and they both look and sound that these stages are their natural home. So many bands that are great in the circuit venues of Manchester (and other cities) look small and out of place when they get an opportunity in the bigger halls, but not The Slow Readers Club. And when you listen to the set of the songs that they have it's very evident why.  Other than Fool and the imposing set-closing Know The Day Will Come, every song in between is a single and one that feels made for this kind of stage. They're not identikit versions of each other either although they manage this whilst still retaining a distinctive sound that's unquestionably them. 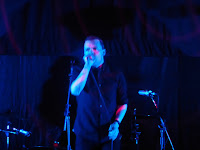 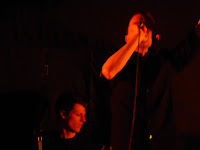 Part of that blossoming process is the fact that they're playing in venues with a sound set up that allows you to hear distinctly what each of the band are doing and to recognise that it's not just the songs that make them special, but how they do it too. When the pummelling drums kick in on Feet On Fire, the understated subtlety of I Saw A Ghost envelops you r the electro-stomp of Plant The Seed gets your feet tapping, The Slow Readers Club win over a crowd that likely hasn't heard of them as evidenced by the cheer when they tell us they're an unsigned band from Manchester and the queue at the merchandise desk at the end. 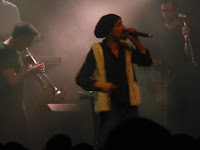 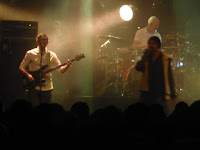 "Shut up and start listening" says Saul as he walks on stage past Tim's microphone to a now-packed floor area. You suspect that people aren't quite ready for what's about to hit them given that the Cliffs normal roster of bands is one that looks like a pension fund top-up exercise rather than one at the peak of their powers eschewing most of their back catalogue to bring you a new album that feels like a resurgence. Thus they start with four new songs - Move Down South, To My Surprise, Alvin and Waking - four songs that come alive even more so than the record tonight. They're full of the thrill of the band learning how best to play these songs, experimenting, making them sound different each night. Where Girl differs from the previous post-reformation James album and why this setlist works so well is that the whole album is full of songs made to be played and to thrive in the live environment rather than five or six great live songs and five or six great songs that don't make the transition across as strongly. Contrast Alvin and Waking with, say, Quicken The Dead and All In The Mind off La Petite Mort - it's a judgement call and matter of opinion whether they're better songs, but it's undeniable that on a stage in front of two thousand punters they feel more at home. 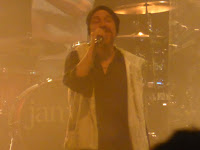 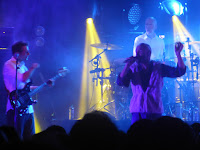 As Ring The Bells kicks in with Dave's signature drum roll that makes us think they're about to play What's The World, it's an invitation to lose yourself in the whirlwind of the breakdown as the music and the lights reach breakneck speed. It's always been one of the most thrilling moments in a James live set and after a rest it's back. The quantity of new material in the set means that they can interchange some of the biggest hits from night to night (there's been no Laid or Getting Away With It so far, for example) to keep things fresh and avoid the danger that anything becomes stale and tired. With Attention and Nothing But Love having the bravado as the new kids on the block to claim their place at the end of the set and encore, Sometimes appears mid-set and loses none of its delirious effect without its sing-along ending.

Bitch and Surfer's Song are further powerful examples of the potency of Girl live. The two and a half minute intro, the typically James perverse "bitch, bitch, bitch" chorus line all wrapped up in a mesmerising light show of reds and greens and the cascading rhythms and incessant acceleration of the latter continue that James tradition of album tracks overshadowing some of the more traditional, if you could ever call a James song that these days, focus tracks / singles. For a band that's often seen (incorrectly) as a singles band, there's so many perfect contradictions in a live set.  Girl, the song, feels like they're still working on how best to play it, experimenting with the first verse in front of us, but it has that uplifting feel once the chorus comes in despite its subject matter - "dying ecstatically in a car crash" as Tim deadpans. 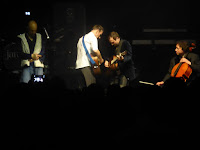 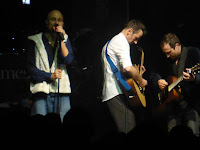 "This is an old old James song" is the introduction to One Of The Three. It's funny hearing that given they were together a decade and produced four albums before. Its beautiful lilting peaceful opening is a wonderful contrast to what's gone before and a lot of what follows and further sign that James are not an ordinary band that play by ordinary rules. It's a challenge to an audience that might now be getting restless for something more familiar, but it's at moments like this where James stand out the most from the crowd.

They gather centre stage for two acoustic numbers - and light relief for anyone who hasn't bought the new album as they will know both She's A Star and Just Like Fred Astaire. The former has had the stripped down treatment before, but not quite like this as Jim and Saul are almost nose to nose, lost in a world of their own oblivious to the two thousand pairs of eyes trained on them. Fred Astaire is transformed, the acoustic rendition driven by guitars that speed up slowly throughout as a pulse starts to race when you're in love. It's probably the nearest they've been to that folk tag that once got foisted upon them, but naturally in their own unique way.

Dear John, like Girl, is another fascinating one that you feel that they're working on in this very public space, but rather than this being a mess as it would be with bands that need to be note perfect rehearsed, it makes the song and this performance (and every other one) special in its own way. Catapult proves my earlier point about the live qualities of this record. 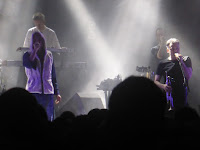 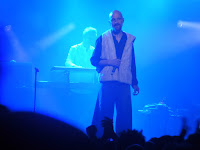 Then it happens. Honest Joe, a song (if you can call it that as it doesn't have things like verses and a chorus) from their improvised album Wah Wah, is the unquestionable highlight of the night. It's a mad cacophony of noise and effects, made up vocals from Tim and Saul, a wall of light that serves just to accentuate the impact of the channeled chaos that's coming from the stage. It ends with Saul on violin, Tim lost in a world of his own and thousands of us stunned. Sound and Attention are up for the fight though to close the set. Again, Chris Montrie's lights on Sound help to make the song so powerful, Dave's hard drums in the chorus being matched by blinding lights. For a song that's a live staple, they always find new ways of twisting it. Attention isn't phased at all by its big brother, dropping down in the middle in a sea of white light and slowly building a wave of tension that explodes all over the audience as it comes back in. It's Tim's favourite song on the album, according to a question in the soundcheck Q and A, and it's no surprise as to why - it bundles together everything that's special about this band in a six minute live package.

There's been a few cries for Sit Down around us at the more challenging moments of the set, and (despite rather than because of that) they get their wish as Adrian appears at the stairs at the back of the hall with Tim in tow and mandolin in hand as they make their way through a sea of iPhones to play the song walking through the crowd. As they progress the rest of the band make their way on to the stage and start to join in, but subtlety rather than the full-on version that people know. Moving On feels weirdly flat in comparison and I'm not sure why - perhaps because it's played relatively straight (and to be fair to them it needs to be) - but there again the reaction it gets at the end suggests I might be wrong. They finish off with a triumphant ecstatic Nothing But Love, the coming together of voices for the harmonies as the stage is bathed in orange light a perfect send off into the night from a celebration of James' here and now.

The Slow Readers Club played Fool For Your Philosophy, Sirens, Start Again, Don't Mind, I Saw A Ghost, Feet On Fire, Forever In Your Debt, Plant The Seed and Know The Day Will Come.

James played Move Down South, To My Surprise, Alvin, Waking, Ring The Bells, Sometimes, Bitch, Surfer's Song, Girl At The End Of The World, One Of The Three, She's A Star, Just Like Fred Astaire, Dear John, Catapult, Honest Joe, Sound and Attention with an encore of Sit Down, Moving On and Nothing But Love.