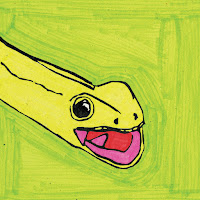 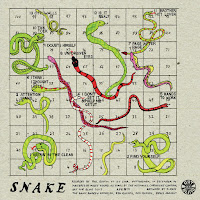 Snake is the third album in the twelve year history of Bakewell's The Hipshakes, but also their third album in the last ten months as the band had focused on singles for the first decade of their existence. The thirteen songs on Snake clock in at just over thirty one minutes and it's that brevity that helps make Snake such a fascinating listen - they don't stand on ceremony at all.

In its best moments, Snake feels like they've just plugged in and played and taped what comes out. Opening track Keepin' In The Clear recalls for us some of the really early Inspiral Carpets demos when Stephen Holt was in the first incarnation of the band. It's got a rough jagged edge to it that might those who like shiny radio-friendly production off completely, but for those with a love of low-fi garage recordings, it'll be like a ray of sunshine through the clouds. They even leave the 1-2-3-4 countdown in Find Yourself whose one minute and thirty six seconds are past before you've even realised, although you'll find yourself (no pun intended) singing the chorus ("you've got to find yourself").

Lyrically they keep things simple throughout, there's no musing on the state of the world or bold statements, but this makes for a record that keeps the listener intrigued. "Attention spans getting shorter every day" is the chorus of Attention Span and again its hundred mile an hour approach means you'll struggle to shift it from your brain and that pattern of the song title being the focal point of a short chorus is one that runs through the album. Yet adopting such basic principles never makes the record feel like its repeating ideas - the like of Unforgiven Eyes and Doubts Himself have clearly fallen from different branches of the same tree.

They don't pause for breath throughout. They make great use of multiple vocalists within the band to add to the raw chaotic feel of each and every song. But on second listen, that chaos dissipates into the realisation that this is far from that, it's an album that's structured to hit the target first time, landing a knockout blow every two and a half minutes.

There isn't a real standout track because there doesn't need to be one - the album is far more than the sum of its parts, the sound of a band of mates having the time of their lives and not taking themselves too seriously but, by doing so, conceiving a record that shines as a contradiction to the increasingly polished sound that radio stations large and small are looking for these days. This fact is borne out if you ever get the opportunity to see them live.

Snake is a triumph because it never over-complicates things and there's no pause for breath over the half hour. It's a record that in another time would be recognised as a garage classic, for now it'll reside in the hearts, minds and brains of those lucky enough to have crossed its path.

Email ThisBlogThis!Share to TwitterShare to FacebookShare to Pinterest
Labels: The Hipshakes