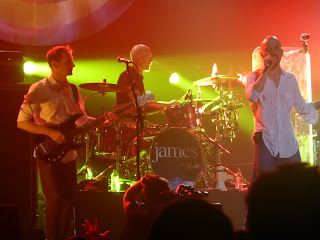 Moving on from the previous night's spectacular Manchester show, James moved across the Pennines to Tim Booth country for a Saturday night show at Leeds' relatively new First Direct Arena.

Top Of The World was an unusual choice to open up an arena set, particularly on a Saturday night with a crowd that had been on the lash for the main part of the day and which, noticeably if the relative lack of James t-shirts on show was any indication, possibly was more inclined towards the band's back catalogue than the new album. The stage is lit in a hazy blue as the song's eerie bass and then Saul's violin solo pierce through - it's beautiful in its execution and a brave move for a baying crowd that had emptied the bars en masse as the lights went down minutes earlier. Move Down South, the first of ten songs from Girl At The End Of The World, doesn't quite manage to spark the crowd into life other than in pockets. 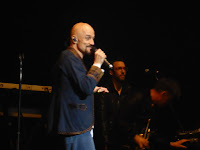 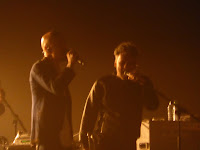 Any concerns that the new material might not connect to this audience are summarily dismissed though by To My Surprise. It's blossomed spectacularly from the recorded version (think how Getting Away With It has for reference). Tim had earlier given a speech about the crowd looking after him if he came down after the attack on him in Llandudno, asking us to treat him like a precious ming vase and to be gentle with "this old man and have a fucking good evening" to which Saul wisecracks "Ming The Merciless."  Leeds crowds have a reputation in James' past for being boisterous, but he's treated with the respect he asked for as he surfs out amongst us, never missing a word or dropping the microphone. Suddenly the mood of the night has changed in a moment.

Surfer's Song is another one of the Girl songs that has taken on a new life since the tour start. Addressing the crowd stage left, it has the thrill of a rollercoaster or the riding of the waves alluded to in its title. It feels very different to anything James have ever done before, but at the same time it's a skin that they have taken to naturally, the raw energy that burns at the core of the band shooting out in all directions. The Leeds crowd, whether they know it or not, love it.

Curse Curse has been notable by its absence so far on the shows we've been to as it's probably the song that pointed them in the direction that they've taken on Girl. The fact it stands tall and proud against the giants that are Come Home and Sometimes that follow it is testament to the fact that the band are still making that vital connection to their audience even though we're all a little older in the tooth and greyer of hair than we were back then. Come Home sends the crowd into a frenzy, recalling days of university, trying and failing to imitate Tim's inimitable dance, and ending up soaked in beer. As Sometimes, with Adrian yet again coming centre stage for a guitar solo that absolutely nails it, comes to its close, the band stop playing and the crowd just take it and run. When it's so spontaneous as it is tonight, there's nothing the band can do but go with the flow - they stop and gaze in awe for a minute, before joining back in. The only way they'll ever stop this is by not playing it. 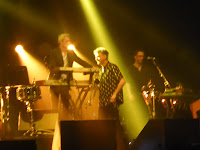 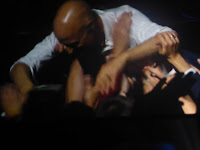 It's back to the Girl though for three more songs, a steadfast refusal to play by the game of arena-straddling bands that just pump out their best known songs with new album tokenism. Feet Of Clay is the most beautiful and fragile moment on the record, but it's built of much sterner stuff than its counterparts on La Petite Mort (Bitter Virtue) and Hey Ma (Semaphore) and refuses to get bullied by what's around it. The sound is crystal clear and Tim's vocal delivery particularly exceptional on this, his voice crackling with emotion that just makes this even more poignant. Girl itself is another one that has blossomed as the tour has progressed, it has lifts at different stages in the song as so many of James' most connecting work does and Catapult has a similar impact and sees Tim back amongst us, almost making it all the way back to the mixing desk, a very brave move with a Saturday night crowd.

Tim starts to sing Say Something without accompaniment at first and by the time the band come in, they've taken control of the song. It's one of the more simple songs in James' catalogue and one that's been twisted and turned so many ways it's difficult to be surprised by it anymore, but it's undeniably one of the most loved as well as the reaction it gets attests to. Bitch, with its soaring threatening opening that's so loud it's on the brink of, teetering on the edge of, distortion is a completely different animal - it feels strange hearing it mid-set when it's a perfect album and set opener, but that's quickly forgotten as several thousand people sing back the title to the band. 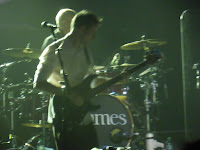 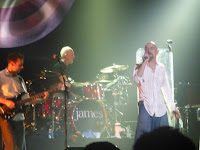 We're Going To Miss You is a real triumph too, Tim sitting down in awe at what's happening around him on stage as the songs hits the breakdown and the band are very clearly improvising in front of him and us as it weaves its way through the sauna-like air. The acoustic part of the set features She's A Star, before which Saul quips that they don't know what they're doing although five thousand plus Yorkshire women and men might disagree as Tim and Ron, who provides some beautiful vocals that complement Tim's perfectly, are almost drowned out. What For doesn't quite get the same ecstatic response as it did in Manchester the night before, but our gaze is fixed to the screen that focuses in on Jim's finger work on his beautiful acoustic bass.

The shimmering treachery of Dear John is a precursor that doesn't prepare the crowd for the final onslaught that descends upon them. In these big halls Honest Joe feels even further from anything you'd expect from a band filling places like this. It rumbles away with an unsettling menace before exploding into a wall of green light, duelling megaphones, ecstatic dance and drumming so rhythmic and tribal that you fear the apocalypse is about to engulf us all. Sound is rife with improvisation tonight from the almost jazz tones of its opening bars through its lyrics to Andy dashing along the barrier, illuminated red trumpet in one hand, high fiving the crowd with the other, Ron on a second set of drums and Adrian marking his mark on the breakdown. As Andy clambers back on stage, he's greeted by a huge hug from Tim that tells its own story about how the band are functioning on this tour.

Attention brings the main set to its conclusion, introduced as the song that they're most proud of on the new album and rightly so. It's the perfect way to end the main set, its middle section where the song stops and comes back in slowly thanks to Mark's keyboard trickery, building, building, creating an expectant buzz before its crescendo. 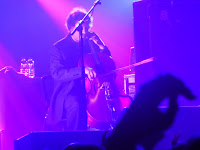 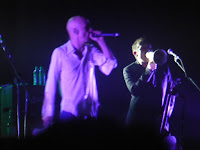 Whilst the First Direct Arena is probably the best of its kind in the country, built to give the maximum number of people the best view and for the sound to feel right everywhere, it isn't set up for the walkabouts that James like to do, so Tim tells us that they're going to do the unexpected which is what people would expect from them. Sit Down is played full band all of them on stage and feels as fresh and triumphant as it has ever done and it looks like the band are having a blast playing it again, reconciled with the way it does sometimes overshadow the rest of their work in the eyes of some, but that's something out of their control unless they deny it completely.

Moving On and Nothing But Love close proceedings, that in itself a statement that James in 2016 are not just about their past but the here and now. These two songs were born in a different era to their big hit singles when radio was king and what was loosely collected as indie guitar ruled the airwaves and the charts, but that in no way distills or lessens the impact these songs have - one above death is turned around into a celebration of life and the other simply is an unquestioning love song that leaves us streaming out of the arena on a high.  It might not have reached the heights of Manchester the night before, but those type of gigs come along once in a very long time.

James played Top Of The World, Move Down South, To My Surprise, Surfer's Song, Curse Curse, Come Home, Sometimes, Feet Of Clay, Girl At The End Of The World, Catapult, Say Something, Bitch, We're Going To Miss You, She's A Star, What For, Dear John, Honest Joe, Sound and Attention with an encore of Sit Down, Moving On and Nothing But Love.