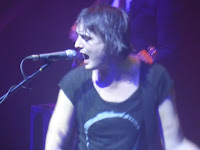 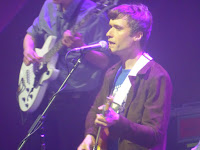 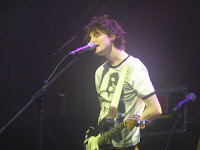 Peter Doherty brought his Eudamonia tour to Manchester's Albert Hall on Tuesday night. Mixing solo material with that of his bands The Libertines and Babyshambles was an interesting contrast in style and pace before an adoring crowd. Support came from The April Rainers and Trampolene's Jack Jones.

We enter the Albert Hall, looking odd with sunlight streaming through the walls of the old Wesleyan chapel, just as Jack Jones of Trampolene, already mid-set starts a poem about Ketamine, the horse tranquiliser. It's hard to tell whether he's glorifying it or it's a public health warning or a mixture of the two, but what it, and the multi-versed observational tale about the health and well-being society that is the job centre in Wood Green where he lives, do is confirm that he's far more than just the lead singer of a massively under-rated band, but also the Welsh answer to our own John Cooper Clarke.

That way with words carries across into the music he performs too. Light Up A Paper makes the fatal declaration that "you are the only one I like to do nothing with, that's why I need you so" whilst new song Cinderella's Shoes has a battered and bruised romanticism to it. It's not hard to see why Doherty and he have such a bond formed as they're similar in many ways in their artistic expression, but as Jack leaves us arm raised in acceptance of the audience's applause, he's also very much an icon of his own making too. 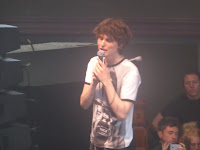 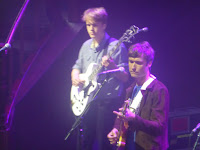 The April Rainers are a relatively new band that include John Hassall of The Libertines on guitar and vocals. They don't say much, they don't tell us any song titles and as they've nothing released as yet, we can't really report on them either. What we can say though is that they have a love of traditional song structures and harmonies that remind us somewhat of The La's. There's one song that stands out in particular that talks of Intercity 125s, a flashback to the days of British Rail. That love of the past though doesn't stop them sounding fresh and invigorating and those melodies and harmonies are so strong you can't help falling for them.

We weren't sure quite what to expect from a Peter (as it's billed rather than Pete) Doherty solo show. Until we'd seen The Libertines earlier this year we'd seen him as that cartoon figure that the press portray him as, but the more you dig you find stories that tell something different about him and his connection to his fans, which explains that undying loyalty that they have to him through his troubles. The tour is entitled Eudamonia - translated from the Greek as health or welfare or human flourishing - which is a promising start before he's even started. He's on time too, give or a take a few minutes and the roar that accompanies his arrival after his band mates have one by one made their way to the stage is a deafening roar that tells its own story. 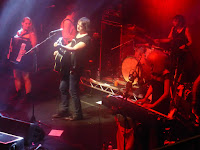 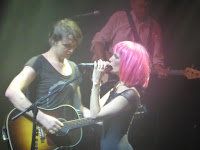 The audience response to the set is one of the most varied we've ever witnessed. There's pandemonium from barrier all the way to the mixing desk from the minute the first bars of any Libertines or Babyshambles song strikes up or even when he takes off his hat and tosses into the audience or removes his jacket a few songs in. You're My Waterloo, Albion and the encore's Time For Heroes are cases in point, yet the response is much more muted for the raft of solo material that makes up the bulk of the set. The likes of Arcady and The Last Of The English Roses are exceptions to that, admittedly known to the crowd from his solo album Grace/Wastelands but the much more considered approach of parts of the set do lose parts of the crowd, especially up on the balcony whilst those downstairs pinned against the barrier never waiver in their devotion.

This does him a massive disservice and is down to the expectations of the crowd wanting a greatest hits set rather than new and less familiar material and the quality of the gig itself as there's moments of real beauty in there. His band consists of a keyboard player (with shocking pink hair) who plays melodica as well, an accordian player, a violinist as well as the more traditional drums and guitars and it looks and feels like he has a real connection with this diverse group of friends that he tells us come from five countries. It's at these moments where the tour's title makes perfect sense, this is a man at ease playing music that's far removed from the pressure cooker environment of his bands. It might not be the same or have the same impact as the crowd-pleasing morsels that are scattered throughout the set, but these moments feel special and make us warm to the man. 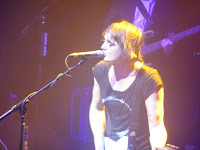 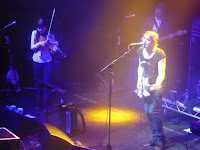 There are moments, as there are with any troubled soul, where it threatens to go off track. The second song of the encore, Flags Of The Old Regime, his tribute to his friend Amy Winehouse, feels like it's never going to start as he stands with his back to us, yet alone end, but he's forgiven that indulgence and the final song feels like it's finished and then starts again so many times that people start to leave. However, despite that, Eudamonia feels like it's a success because it isn't simply him turning up and running through Libertines and Babyshambles songs - it's close to the bone, heart on the line, doesn't always quite connect but that's what happens when you take risks, play from the heart and do your own thing. He might have his flaws, but then so do many geniuses.