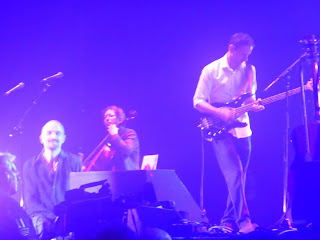 The penultimate night of the Girl At The End Of The World tour saw James reach the National Indoor / Barclaycard Arena in Birmingham.

Opening the set with five new songs is even more a risk in places like this where you can’t see the whites in the eyes of the band such is the distance from crowd to stage, but that’s exactly what James do. To My Surprise opens the set for the first time and feels like an inspired selection – it’s a song that has grown throughout this tour, aided by a brilliant lighting arrangement, into far more than the sum of its parts. That chorus “were you just born an arsehole?” feels celebratory with thousands singing it back to Tim.  “Thank you fellow arseholes” he tells us at the end.

Move Down South is starting to catch fire now live and fulfil our expectation that it would be one of the songs from the Girl album that would really connect. It’s taken a while, but now the energy is channeled and when it reaches its climax and multiple voices kick in, it feels uplifting and life-confirming. Catapult sees Tim go crowd-surfing for the first time, a brave move for a man in a kilt, but he later tells us he’s got cycling shorts on underneath. 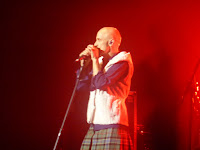 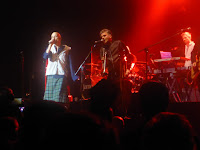 The dual salvo of Alvin and Waking, tracks 10 and 11 on the album where songs that don’t get played live often reside on James albums (I’m making that up off the hoof), but Girl is such a powerful record with no weak tracks that these two, segued together by Dave and with Andy’s trumpet taking a bigger role than on the recorded versions, far more than hold their own with everything else around it.

Tim talks of a divide of those who have come to listen to Girl and those only interested in “older ideas” and the next three (or two depending on the depth of those older ideas) cater to the latter – well, all of us, but them specifically. Ring The Bells and Sometimes are exultant, powerful and feel almost spiritual as Birmingham finds its voice and sings along to every word as if it were their last. PS is a complete contrast, finishing with a delicious Saul violin solo and then a few finger plucks as he walks towards Tim who’s been stood transfixed by his friend’s talent and tells us “there’s nothing like a violin to touch the heart.”

Dear John is all menacing and shimmering and feels like it has a lineage from We’re Going To Miss You that follows it. The latter has a magnificent extended outro section that’s being made up on the spot adding mystery and even more spontaneity to the evening’s events. 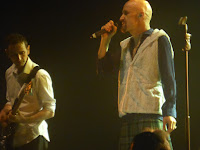 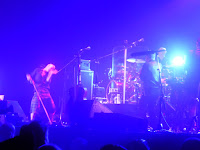 The two-song acoustic slot tonight is She’s A Star and What For. The Birmingham crowd’s reaction to the former tells its own story although the response to the latter (dedicated to Simon Moran, their promoter since the mid-eighties) is muted at first, but the song soon wins people over by sheer weight of its unifying power (it was the first real James ‘anthem’ or whatever you call them in the days where radio ignored them).

What For into Honest Joe is the sort of move that the wet dreams of hardcore James fans are made up of. Again, it gives them so much scope to do something different with a song (or a piece of improvised music, which is effect what Honest Joe was), Tim prowling the stage, dueting on megaphone with Saul, watching Adrian let loose on guitar and finishing it lost in a world of his own, megaphone swinging round above his head. Quite what the casual fan makes of it would be interesting to hear, but it’s one of the reasons why James are unique. 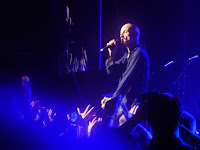 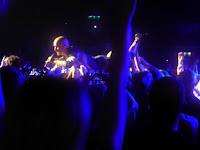 If the set started with five songs that meant parts of the audience took time to get a foothold in the gig, the last five of the main set bury them waist deep so they can’t escape. Tim comes out amongst us again for the appropriately named Surfer’s Song, not dropping a word as he’s passed hand to hand across the top of us . Curse Curse is bold, powerful and celebratory as everyone punches the air at the moment the chorus kicks in. Tomorrow starts off slow and builds, Tim and Saul eyeball to eyeball singing in the first verse before the light show illuminates the whole place as the song blasts its way through to its end leaving a trail of destruction in its wake.

Sound is another song where James take the opportunity to improvise and no two versions ever sound the same as they lose themselves in the moment. Andy appears in the seated area and his trumpet call rebounds around the cavernous space as his band mates twist and turn the old favourite seeking new sounds and new avenues. The main set concludes with Attention, “a new song because we’re difficult Mancunian bastards”, but it demonstrates why Girl is such a reinvention for them. Often new songs do get bullied on a tour and either move from such key positions or vacate the set, but this tour is different. Attention is the perfect closer, the middle section between the two main parts of the song where it drops down perfect for these dark halls and a build back in. 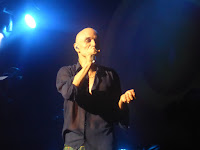 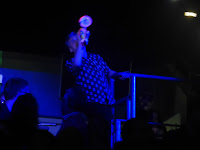 Just Like Fred Astaire, in its rearranged acoustic form, opens up the encore and confirms its status as one of the most loved James songs. Two couples in the soundcheck talked about it being their wedding song and around us other couples hold hands or more.  Moving On feels like it belongs in these big venues, it has a lift and a power to it that transmits and amplifies the words that make it up and Nothing But Love, which finishes the set and sees the stage and band covered in confetti, has a similar impact as thousands of voices join in one to prove that this is a band still making music that connects in the same way they did a quarter of a century ago.

James played To My Surprise, Move Down South, Catapult, Alvin, Waking, Ring The Bells, Sometimes, PS, Dear John, We’re Going To Miss You, She’s A Star, What For, Honest Joe, Surfer’s Song, Curse Curse, Tomorrow, Sound and Attention with an encore of Just Like Fred Astaire, Moving On And Nothing But Love