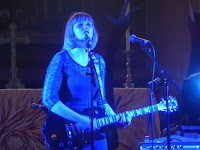 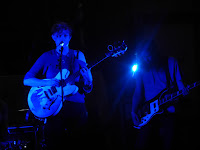 The holy surroundings of St Philips Church in Salford provided the backdrop for two great sets in surreal circumstances with light shining through the glazed windows at the start of Sounds From The Other City from She Makes War and She Drew The Gun, both on the promotional circuit for their excellent recent albums Direction Of Travel and Memories Of The Future.

Opening up proceedings is She Makes War and her set is one of real contrasts. One of the most creative artists around at the moment she moves from ukulele only songs like The Best to loop-driven rockers like Delete that sees her walk down the aisle singing and letting loose a siren on a megaphone. Her followers love it and it's clear by the end of the set she's won over quite a few new admirers by the time she's finished.

The set naturally draws from Direction Of Travel and Laura (as She Makes War is for most live shows just her) takes time out to explain the context of songs to us which allows the audience to engage more and warm to her. In Cold Blood is about an "encounter" she had in Manchester several years ago, Please Don't is about the fear of losing her parents and The Best is about an ex-boyfriend. She saves the best for last though. Cold Shoulder is a new song from the album (that wasn't on the original Pledge versions last year) and will be her next single - it sounds harder than anything she's even done before live with the electric guitar plugged in and turned right up whilst that contrast we spoke about returns for her final song, the beautiful aching Paper Thin. She's back in Manchester again on May 13th for a full set at the Fallow Cafe. 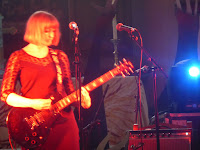 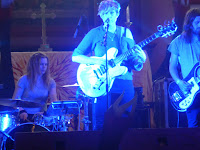 Today is the last show on She Drew The Gun's album tour and the minute the four-piece start up Since You Were Not Mine, the step up they've made in the last few months is immediately evident. Buoyed by winning the Glastonbury Emerging competition and the almost universally positive reviews for Memories Of The Future, the shy and quite Louisa that we saw at her first shows before she got the band has been transformed. The likes of their brilliant third single Where I End And You Begin (about Louisa trying to lose drunk Louisa she tells us) and their debut If You Could See are songs that fill this cavernous church which has filled up considerably to hear tracks from Radio 6's album of the day. As with the album they don't make noise for noise's sake, the songs are treated with respect and with a control and mastery of tempo and volume that simply accentuates the impact that they have.

Mid-set Louisa sings a short song that pays thanks to all the female musicians that have inspired her - too many to name check here - called Thank You. It's followed by Poem, the song that has probably created all this attention around her with its biting, incisive and real political and social commentary. Live, it feels every bit as powerful and damning not just of the politicans but also the way society views those less fortunate. The applause at the end tells its own story. They finish with an equally stirring Pit Pony that has a similar message. It's wonderful to see how far Louisa and the gang have developed in the past six to nine months and the acclaim they're getting, but on the basis of performances like this, hopefully that's just the start.

Memories Of The Future is out digitally and on vinyl and CD.

Email ThisBlogThis!Share to TwitterShare to FacebookShare to Pinterest
Labels: She Drew The Gun, She Makes War