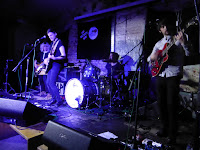 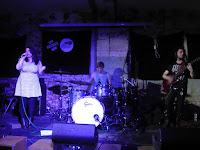 The Tapestry headlined The People's Assembly Beat Back anti-Tory gig at Soup Kitchen in Manchester last night. We were also impressed by Novustory who played before them, a band we hadn't heard of before.

Arriving around the time The Tapestry were scheduled to come on stage we found things running behind time in the true socialist spirit, but fortune was shining upon us as this meant we caught Novustory's set. A three-piece from Tottington near Bury fronted by the iron-lunged Imogen Storey who boasts an impressive vocal range that's soulful in parts but can also pull off full on rock in others accompanied by Declan Brown on guitar and James Duckworth on drums. They've got a big sound that so many new bands take an age to master and they write songs that grab your attention early on and hold it through the intensity of the performance and the sheer quality of the songs.

Their set features tracks from their recent EP Mirrors, but it's songs not on that which impress us the most, Magic Beans, Insanity and 4am in particular standing out. They'd also written a song specifically for the occasion and they finish with the uplifting Twitch. It's testament to the amount of great music in Manchester and the surrounding areas that we'd never heard of them until now, but they're most definitely on our radar after this set. 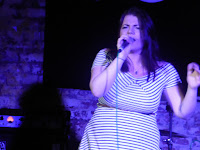 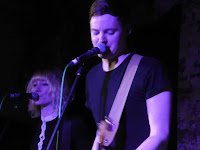 It's still one of the big mysteries of the world why The Tapestry are not much bigger than they are. They have everything a band needs - songs with huge addictive hooks and choruses that batter the listener powerlessly into submission, boy/girl vocal interchanges to die for and a stage presence that means you can't take your eyes off them for a second. In some other world the likes of Right As Rain, Infatuation, Look Out and We Talk would be feted as classics, be staples on every indie disco dance floor of the land and that "Tap, Tap, Tap, Tap, Tapestry" chant be as omnipresent as that Courteeners refrain from What Took You So Long.

Tonight is a sparse crowd by their standards as it's not their own gig, so there's none of the stagediving, crowd baiting, naked stage invaders that you get in the full-on Tapestry experience, but that has no impact at all on the band's performance. Tight as hell, locked in to some ferocious grooves, Zara's drumming the glue that holds everything together quite brilliantly whilst Liam struts the stage, Katy looks cool as fuck despite the one mishap with a cowbell that falls off stage and Dyna being slightly more subdued these days than his wildman days. But not one song fails to hit the mark - recent double A side single Connectives / Catacombs are both present as is a new song Silhouette that shows they're still moving forward without losing what made them so brilliant in the first place. They might still be our secret, but there's no guilt in that.

Email ThisBlogThis!Share to TwitterShare to FacebookShare to Pinterest
Labels: Novustory, The Tapestry