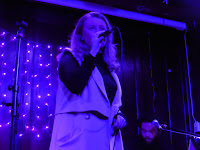 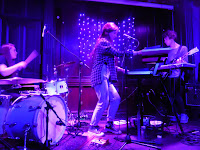 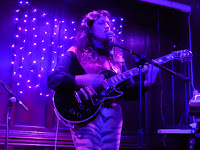 Tonight's Red Balloon triple-header is an intriguing mix of bands and artists. It's headliner Lusaint's second show, whilst the hotly-tipped Feral Love are making their debut live performance on the back of substantial coverage of their debut reveal Like The Wind. Add to that the Welsh singer-songwriter Alana Bondi to complete the line up and it's one of the best Monday night line-ups we've witnessed in Manchester.

Alana Bondi intrigues us from the start. She's only wearing one trainer, which we think is odd, but it soon becomes clear that it's impossible to control the pedal board she uses to loop sounds through without using individual toes to do so and even then it's a tricky proposition as she proves half way through one song. Despite that and a number of technical difficulties and what seems like a bout of nerves, her seven-song set never has our attention dropping. Each song - from the opening SOS to the closing Martha's Owl - has an originality of its own, whether it be through the looping, the pace of the song or the tone of her voice. 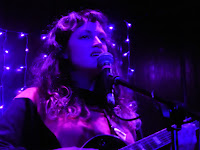 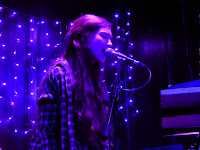 Feral Love have already been gathering plaudits from mainstream radio and some serious attention for Like The Wind, but tonight's hush-hush only announced by them on Twitter as doors opened debut show is something quite spectacular. Whilst we know Adele from her time in the magnificent and criminally ignored Bird, this is something very different indeed. Much more electronic in its genesis, nodding to the likes of the brilliant Coves and Chvrches, it heads straight for the dance floor for most of the set, although it slows down to allow Adele to demonstrate the range in her voice on the more intimate Swam.

They save the very best for last though and Rise feels like it could be the breakthrough song for them to capitalise on the success so far of Like The Wind. It also proves that there's far more to them than any electronic trickery, the live guitars and keys are accompanied by one of the most ferocious drumming performances we've seen for ages - the song being completely dictated by their pace and the rhythm as it drives forward to its climax. Feral Love sound too big for rooms like this already, their ideas way too expansive to be constrained by these four walls, they need big open spaces for their sound to fill and if tonight's anything to go by that won't take too long to happen. 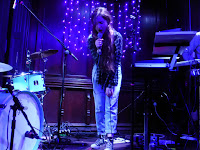 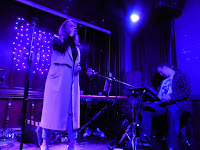 Lusaint is the new project of Stretford singer Lucy Hopkins and marks a change in direction from her previous solo work. Accompanied by keyboards and drums this is a more soulful sound that fits her voice perfectly. She only plays five tracks tonight, one of which is a cover of Fleetwood Mac's Dreams, so this is still very much in its infancy, but the likes of Broken Bones and the forthcoming single Waterfall which closes the short set already feel like they have the potential to reach a much wider audience.

It takes quite a lot to stand out as a vocalist performing this type of music given the plethora of them that try their luck on X Factor and the like, but Lusaint very evidently has an emotional connection to these songs (they're her own for starters) that makes her stand out. It's early days still as the length of the set shows, but it'll be interesting to see what reaction Waterfall gets as it certainly has all the ingredients to make her name known.