She Drew The Gun - Memories Of The Future 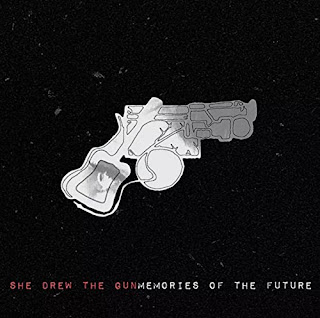 Memories Of The Future is the debut album from She Drew The Gun, one of our top tips for 2016. We're pleased to report that the album delivers on and exceeds all the hopes we had for it and the promise displayed by their early singles.

The album opens with their first three singles - Where I End And You Begin, Since You Were Not Mine and If You Could See - the former's delicious electronic shimmer reveals a battered and bruised regret at the end of a relationship, a theme that continues into Since You Were Not Mine's "tell me I'm just dreaming."

She Drew The Gun's approach is not to bombard the listener with a wall of sound, but rather to create a backdrop that's airy, spaceous and allows Louisa's voice the platform on which the emotion and feeling of  the songs are expressed in the intonation of the voice. That's a brave move but it's one that she carries off with aplomb as the songs are imbued with a richness and sensitivity that you can't help but warm to.

Chains is a song about striving to escape from the mundanity of life where you feel "just like a broken record stuck on a track" over a looping track that serves to emphasize the lyrics. It's a simple but extremely effective and intoxicating approach. Pebbles us even more sparse, to the point the music almost isn't there, but the impact it has is even more powerful because of what it doesn't do.

What Will You Do sees Louisa's vocals at the back of the mix giving it a demo-like quality, but it works perfectly in the context of the record, the chorus "my head is full of sweet sweet thoughts about you" feeling even more intimate and personal as a result.

The album's highlight is Poem of course, given it's probably the song of the year so far. In an era where political comment in music is so anodyne when it even exists, Poem is straight talking finger pointing that hits right at the heart of the matter aiming at not just the evils of conservative capitalism but the "i'm alright Jack" culture that allows it to fluorish. It does end with positivity hanging in the air as a challenge, a call to arms - "there's still time if you feel this way too."

I Am Not Alone has the unenvious task of following it and returns to the reflective musings about love that run through large parts of this record - "can't take your hand because I'm on my own, but if you understand I'm not alone."

"Sweet lullaby, you know you belong here by my side" opens up Be Mine as Louisa's voice dances, and it feels like it's dancing, over a stop-start acoustic guitar. As with so much of the record, it's the sparsity of the instrumentation that makes this so achingly personal and affecting, the words come across as a stream of conscience rather than crafted lyrics whilst the music builds slowly as an underpinning electronic beat comes in.

Pit Pony almost takes you by surprise as it's quite different to what's gone before. A shuffling drum beat kicks in and dictates the pace of the song which has a claustrophobic tension in the verses, the vocals feel like they're almost but not quite distorted before the chorus blossoms out and sheds a little light.

The album finishes with the stunning Oh So I Thought, one of those songs that genuinely makes the hairs stand up on the back of your neck. A keyboard plays a mournful tune in the background, almost funereal in its delivery, and the bleakness makes it an uncomfortable listen in parts where Louisa's musing, with a voice that penetrates your skin and hits the bones, reaches the point where "the full stop in my heart turned into a question mark." It's an ending completely in fitting with an album that's unafraid to explore themes difficult to its creator and which, in turn, most listeners will be able to relate to.

Memories Of The Future is an album to immerse yourself in. A cursory listen might leave you to dismiss it as light touch in parts, but it's far far from that if you give it the time and love that's gone into its making. Its intensity will unsettle as its honesty and laying bare of feelings, emotions and, on Poem, opinions, but music should challenge the listener and reveal new layers with every listen and Memories Of The Future does exactly that. We had high expectations for this record, they've been utterly and totally surpassed.

Memories Of The Future is out digitally today and next week on vinyl and CD.