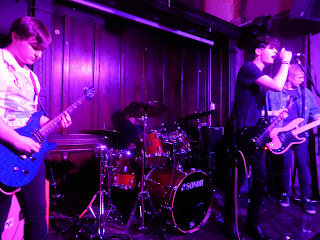 Matter Of Mind are the latest of a seemingly endless stream of bands heading down the A6 from Stockport recently. About to release their debut EP in the near future, they played The Castle in Manchester and already, just ten gigs in, have the look and sound of a band that's destined for bigger stages.

We first caught Matter Of Mind playing an acoustic set at Terry Christian's Mad Manc nights at the Dance House a couple of months back and after we were given a sneak preview of pre-mix versions of their debut EP were eagerly anticipating their next full plugged-in show. A full music room at the Castle witnessed a fierce and uncompromising set from a band that we think will make a massive impression once the EP is released.

Their set features all three tracks from that EP, but they open with a track called Live By The Book that immediately feels like a future single. Already they feel like a band with a sense of purpose, a quick chat with front man Jordan before confirming that they've got a steely focus when it comes to band matters, their sound is already hugely ambitious and made for venues much bigger than this. It's built around huge guitar riffs, a quite phenomenal drummer and a front man whose voice, despite a lingering chest infection, is strong enough to blow people away. 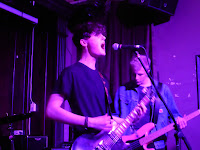 The three songs from the EP - Coffee Stains And Migraines, Silence and State Of Mind - all have a harder and more raw edge to them than the recorded versions without losing any of the structure that's already marked them out as a band capable of constructing songs that will equally at home in a mosh pit as it will on radio (once the swearing has been edited). The former has a chorus that you will find yourself singing along to and wondering where you've heard it. The other two are heavier but no less impactful.

There's a couple of covers in the set as young bands often do when they're first starting out, but these are done with a difference. The first is Amy Winehouse's Back To Black, but other than the words it's almost unrecognisable as they make it their own, the soul / funk edges being replaced by a much harder firmer sound and they segue from Coffee Stains into a section of Faithless's Insomnia. They finish with an early Soundcloud song The Blind Side that'll be wasted if we don't hear it recorded again at some point in the future.

We're mightily impressed by Matter Of Mind. That promise we saw when the four of them played acoustically is more than justified when we saw them play live as a full band. They've got some great songs already that will grab people immediately and they have that steely-eyed determination to succeed and to get people to listen to their music that we saw in Blossoms early on that bands need to be successful alongside natural talent these days. Their new EP is a stunning piece of work for a debut and Matter Of Mind are a band you're going to hear a lot more of very soon because it'll lead to an inevitable scrum to sign them up.