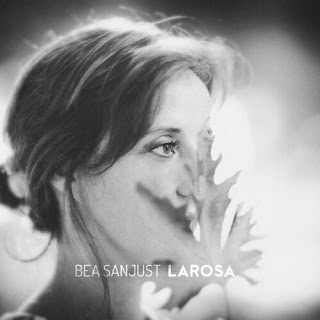 Every so often you stumble accidentally across a record - a recommendation, a friend of a friend, a soundcloud suggestion, an overhead conversation - and that's how we discovered Bea Sanjust. A flick through Facebook saw our friend James from The Miserable Rich chatting to her about the record and ever curious and confident in the taste of one of favourite musicians, we thought further investigation was warranted and it most certainly was.

Larosa is a record that skips from genre to genre without a care in the world. Some of the album is deliberately slow and considered, telling sad tales as on the opener Sawdust and the eerie and haunting Wildflowers, where Bea's voice reminds us of Hope Sandoval in parts as it floats across some of the most maudlin affecting strings we've ever heard committed to record, before she delivers vocal harmonies that lift the listener off their feet and spins them around in a fuzz of confusion.

In contrast Two Sisters has a simple skipping-like beat that dances innocently like a small child in a field of flowers whilst Bea sings with a beautifully evocative lilt to her voice and Julia is far more upbeat, full of delicious drama and a driving beat over the top of it that makes it feel like the purest, most perfect pop song that shows off the full range of her voice. Marijuana has a looping percussion running underneath it throughout, but it's so adventurous around it, hypnotic strings at points, vocals that are seductive but with a mysterious undercurrent before declaring it to be "a love song for father and son."

Piano feels like a bar room ballad, starting again with a loop over which Bea sings the verse before all kinds of unusual instrumentation kicks in with which she mixes some exquisite harmonies. Honey Bye Bye is counted in as if the album recording is the most natural process in the world and the song finishes with what feels like a studio jam with some heavily treated vocals in the background over yet more harmonies that set the hairs on the back of the neck up on end.

She Needs Me is possibly the most simple song on the album, an acoustic guitar all that's needed to give Bea the space to breathe and deliver a vocal that drips with so much emotion as it reaches through its range that it's almost overwhelming to listen to. Twinkletwinklelittlestar feels like a mischievous play on the nursery rhyme, the title repeated over a galloping rhythm that explodes out of a desolate plucked harp (we might be wrong on the instrument here) before returning back for an interlude and then letting loose again.

The Eye clocks in at just over two minutes and returns to a more traditional song structure and again the music is kept relatively uncomplicated to allow Bea's voice to dictate the pace and the mood of the song, which she does with the poise and control we're expecting at this point.

The album concludes with Kings, a seven-minute haunting and fitting way to close the record. Strings swoop and dive painting an incredibly evocative canvas for Bea to complete the journey. The song moves through several passages, as do many of the other songs, that don't necessarily fit perfectly together, but work because of the space and room that the musicians grant Bea and her show-stopping voice.

This is hands down one of the most beautiful records I've heard for a very long time. It touches so many bases and aims for so many targets and hits every one square in the middle of every time. Bea possesses a voice of true beauty that's comfortable in every musical playground it finds itself in. It's a record that's hard to get through in one sitting for the simple fact you want to go back and listen to the last song the moment it finishes.  It deserves a much wider audience and accolade than we suspect it might get, but that would be a travesty.

The album is out on iTunes now and the CD version should be available this week although we've found no sites shipping to the UK.  There's an album launch show on April 14 at Lanificio 159 in Rome.