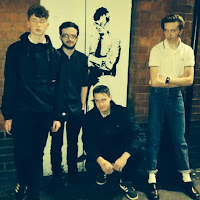 Urban Theory are a new four piece band from the suburbs of Manchester. Still in their formative phase they've just released a demo track called Knickers that made our ears twitch. Full of the frenetic energy of youth, nodding to but not stealing from their heroes and with a biting edge of social commentary.

So far, it's the only song available on their Soundcloud, but we've heard another track called Distress In The Ginnel, even shorter than Knickers, that's every bit as ferocious and of the street.

They play a gig at Manchester's Retro Bar on May 21st.