Cavan Moran - Forever On The Road / Forever At Home 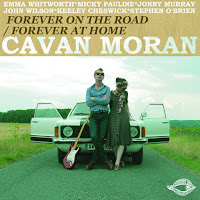 Forever On The Road / Forever At Home is the long-awaited debut album from Cavan Moran. It's an album that talks, as the title suggests, about life on the road. It remains true to its folk roots, but keeps everything sounding fresh and real without over-complicating it so that on reflection it's one of the best singer-songwriter albums to come out of Manchester, or indeed anywhere, in a long time.

The album's opening track The Wheel Of Rhyme sets the tone for the rest of the album. It immediately brings to the fore Cavan's troubadour qualities - this is a record full of tales from the road, from the journey he took when he left Manchester and his previous band These Eyes Are Cameras to travel and discover himself. Those tales he tells are world-weary, lived in, open and honest yet told with sensitivity and no lack of humour.

Lord When She Comes (How She Goes) is one of the album's highlights as it steps out of the folk scene with guitars up in the mix that make it feel infectious and a song you'll have stuck in your head for days after. Five Simple Crimes clocks in at over six minutes, but never outstays its welcome as it moves from a simple guitar in the first verse then has his partner-in-crime Emma Whitworth's vocals adding light and shade at just the right moments, before building slowly into a beautiful stretched out instrumental outro that gives any listener with a soul a warm glow.

Bags Of Gold is a love song opening with "I want to live in her palms, I want to die in her arms" that manages a really neat trick of not needing to accelerate or change direction but holds the listener's attention, whether it be the way that Cavan tells his stories, the interaction between his and Emma's vocals or the understated music.

One of our live favourites The Ballad Of Gare de l'Est tells the tale of Cavan's travels across Europe that ended up in Paris, the music providing a racing beat that compliments the story, speeding up or slowing down at the right moments as the story dictates. It's followed by Into The Wild, a song a good minute shorter than anything else on the record but no less impactful, it's got a haunting strummed acoustic guitar underpinning it around which other instruments float delightfully as Cavan implores the song's subject to "stop me before I hurt somebody." It's powerful stuff, even more so because it feels completely natural rather than forced or structured for a purpose.

Lonely Rival starts with a harmonica that feels so sad and it sets the scene for one of the most reflective songs on the album. Cavan's stark honesty comes clearly into focus "I just hope I'm not around to feel the shame" as Emma twists her vocals around the harmonica parts in the breakdown. The album concludes with Song For Lucille, a real travelling song, opening with "the way I roll from town to town" which tells of his travels through Europe with "pockets full of ticket stubs" as he heads through Germany to Berlin, and finally Pricked To A Pattern which is a fitting way to end proceedings "come follow me, lift your soul and set him free"before reaching its finale with an uplifting coming together of instruments and Cavan and Emma's voices.

The production of the record is pristine and clear, allowing the listener's emphasis to focus on Cavan's voice and words. It never once feels cramped or cluttered as is often the case with folk acts trying to throw the kitchen sink at a record, yet the other musicians' contributions cannot be underestimated.

In the final reckoning, Forever On The Road / Forever At Home is a record that's been worth the wait, it feels like a labour of love, the passion and emotion that Cavan puts into his work is laid bare for all to see. Its warmth, honesty, complete lack of pretence and belief in the virtues of storytelling shine like a beacon.