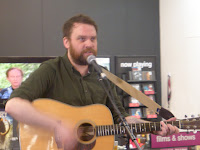 In support of their new album Painting Of A Panic Attack, Frightened Rabbit are currently on a UK tour and are stopping off at record stores for promotional sets and signings. We caught up with them at Manchester HMV to see Scott perform an intimate five-song solo set before three of them signed albums for the crowds that had gathered.

The logistics of the HMV set up and the record company's limited budgets meant that this in-store was a solo performance by Scott and we start with a hilarious moment where he performs his cursory soundcheck in front of us, counting to ten in odd accents whilst getting his guitar in tune and the amplification working properly.

That, and the chat between songs, provides an interesting and stark contrast to the content of the songs. Frightened Rabbit songs come from a dark place, yet the delivery and sharing of the songs, like so many great artists, feel cathartic in a way. Their new album Painting Of A Panic Attack is no exception to this rule and three of the four songs Scott plays come from this record as you'd expect on a promotional tour.

Opening song Get Out was one that previewed the release of the album so is familiar to those that hadn't bought the album on release on Friday in order to wait for this event. It's a tale of lost love with the tag line "Get out of my heart, she won't, she won't" which feels even more intense and claustrophobic with just an acoustic guitar and Scott's facial expression acting out each and every word. Even starker is I Wish I Was Sober, the song that follows it on the album, it's a dark tale of coming to terms with addiction that also is accentuated by it being stripped back to its bare bones. Scott's declaration "Forgive me I can't speak straight, forgive me I can't, forgive me it's far too late" doesn't lose any of its feeling of helplessness in a Manchester record store in the early evening. 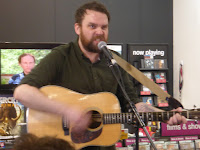 He doesn't just play new material and the third song is The Modern Leper from The Midnight Organ Fright. Scott then asks for requests and as with these events gets a couple of rarities thrown at him that he willingly admits he doesn't know how to play having not been on the road for two years. He settles on My Backwards Walk also from The Midnight Organ Fight album. As its tale of being unable to break free of a relationship that he knows cannot work concludes with the repetition of the cutting genius line "You're the shit and I'm knee deep in it."

The set concludes with the new album's closing track Die Like A Rich Boy and Scott explains to us that the version on the album is pretty much the original demo he recorded at home on the kitchen table. It's an extremely dark song about the contemplation of death, one of, if not the strongest and most descriptive lyrics that Frightened Rabbit have ever come out with - "If I leave this world in a loaded daze. I can finally have and eat my cake. I want to die like a rich boy diving in a hydrocodone dream" as an example.

The only complaint about this set is its brevity. It would have been great to hear more of the new album in this rarefied stripped-down to the bare bones format that serves the three that they play so well. These songs may not be perfect radio material, but Paintings might just be the most listenable Frightened Rabbit album yet if you can deal with the intensity.