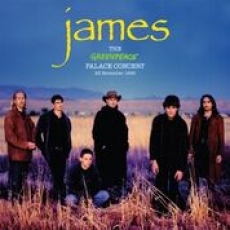 Back in 1992, James had the world at their feet. They sold out 30,000 tickets for their own headline show at Alton Towers broadcast live on Radio One and were starting to break into America. So, like the awkward sods they've always been, they decided to go back to their roots and do an acoustic tour. One night of that tour at the Palace in Los Angeles was recorded by Greenpeace using solar power for a compilation album. Ring The Bells appeared on that album, but the rest of the concert remained unreleased until now, where it's been rediscovered in the Universal archives and released on glorious double clear vinyl for Record Store Day.

The genesis of this record is a strange one. James' album Seven, released earlier in 1992, had been their most successful record to date, but had been roundly castigated as being "stadium rock" by much of the music press that had championed them for so long when they were outsiders. The band, not naturally ones to put themselves in the limelight in the way the likes of Bono would, therefore jumped at the opportunity to challenge themselves and confound their critics when Neil Young asked them to open for him at some outdoor acoustic dates in America in the autumn. The band had never played acoustic before, but the spontaneous risk-tasking side of James didn't see this as a challenge and won over vast swathes of Young's fan base, enjoying themselves so much in the process that they continued their own US tour playing this way before returning to the UK for a series of dates in December.

The transformation of James at these shows was similar to that witnessed when they took to the road with an orchestra and choir in 2011. Some of their best-known songs were revisited, distilled down into something far more subtle and enchanting whilst they also unveiled new songs and brought back to life some of the less well-known and obscure parts of their back catalogue.

It's hard to imagine James shows now without Out To Get You, the opening track on 1993's Laid album and this record, but in 1992 it was almost an after-thought when considering James' finest works. It appeared on the 12" and CD versions of Lose Control in 1990, before Sit Down took them supernova, in a six and a half minute demo form. The hardcore fans loved it of course, but to the average man on the street it was probably inconsequential at that point. It was on this acoustic tour that it was rediscovered and moulded into the shape that made it a fan favourite and even saw it appear on the band's 1998 Best Of and feature in so many set lists since resplendent with Saul Davies' beautiful violin solo.

Next up is America, a song unreleased at the time which was, and still is to this day, a typically bold move from a band that thrills itself and its audience by venturing into the unknown. In this case they actually ended up using this version to release the song as the b-side of Sometimes the following year as they couldn't recreate the magic that they created acoustically on stage in the studio.

The only other performance on this album that fans will recognise follows. Ring The Bells was the song chosen from the set to appear on the Alternate NRG album that Greenpeace released. This show's mythical status, the press release's words not mine, was enhanced when the song appeared on an episode of The X Files. Stripped back of the album version's big production and slowed right down it feels even more powerful particularly as it builds slowly, speeding up gradually in the breakdown where you can visualise Tim losing himself in dance. It's extremely powerful stuff and not something you'd expect from a band that was being hailed by some as the biggest British band of the moment.

Things start to get really interesting when Mark's accordian start into the opening bars of Come Home, a song that, with its signature unmistakable keyboard motif, you'd ordinarily consider a no-go for this kind of performance. However the acoustic guitar of Larry Gott is more than up to the challenge of creating something weirdly wonderful that sits the song on his head and makes you look at it in a different light.

Top Of The World feels like a fairly obvious go-to choice for an acoustic set given the sparse nature of the original, but the crispness of the recording and the performance send shivers down even the hardest spine. There's an eeriness to it that hangs in the air and on every one of Tim's words with a palpable tension until Saul's violin takes it off into the stratosphere. It segues beautifully into another interesting set selection Goalies Ball, which was released shortly before the tour as a bonus track on the Seven EP having been written after the album was completed. It's one of those half-song half-jam tracks that James were so brilliant at away from the pressure of expectation of delivering hits with a songwriting process that didn't necessarily create them - the chorus of "goalless draw, goalless draw, goalie's got the ball" slightly bonkers but weirdly unforgettable.

Next Lover and Heavens, both from the Seven album released only nine months before the show, are two of the best examples on here on how the acoustic form reinvigorated the band and took the song back to the edginess on Next Lover's early live appearances on the Gold Mother tour and the demos. You Can't Tell How Much Suffering (On A Face That's Always Smiling) from Gold Mother is an inspired choice as it straddles the line between James' earlier folkier and wilder moments and the more expansive sound they embraced when they expanded to a seven piece. It's insistently urgently, shard of violins here, a driving drum beat that dictates the pace and vocal expression that sometimes got lost in the melee of sound in the electric gigs of the time.

Sit Down is a thing of genuine beauty. Firstly, and it has to be said, there's none of the desire from the crowd to turn it into a singalong, often a great communal coming together and thrilling for those there, but for a recorded document it's a blessing and secondly it's distilled from a chart-topping, arena-filling into something far more intimate, often described by Tim on the tour as "an old English folk song" and he has a point. It removes the stigma of over-exposure and strips it back to the simple fact that it's a brilliant song, one of unity, love, peace and togetherness. Alongside the Hilversum Meter session version, this is the best version of the song you're likely to hear.

James had raved about a song called Maria's Party in interviews just before the tour and they chose to close the set with it despite it not yet being released or even properly recorded. In fact, it ended up on the improvised Wah Wah album with Larry singing. However here you can see why they loved it so much at the time - it's the antithesis of the Seven album, a raw story about "a great great party" that talks of belly dancers from Marrakesh and a gypsy playing trumpet in a second hand dress which is a million miles away from what you'd expect from James at the time.

The inevitable encore comes and despite Tim telling the crowd that they'll have to help with the falsetto, there's no such need. Sound is stretched out to ten minutes and it's where James are at their best as they improvise sections, unsure of where they're going to take the song next, who is going to take to the lead, but it all coming together without falling apart. It builds, then drops, then builds again and the intimacy of the acoustic performance makes this feel even more on edge, teetering on breakdown before exploding into a wall of sound than ever before.

Record Store Day might be an excuse for major labels to rehash any old rubbish they can find and charge exorbitant money for it because of the band's name and the compulsive nature of the hardcore fan bases, but The Greenpeace Palace Concert is a genuine exception. It shows the band at their most vulnerable, inventive and risk-taking - stepping back from world domination to follow their creative instincts. If you're a fan of the band, you need this record in your collection.