Track Of The Day : The Tapestry - Catacombs 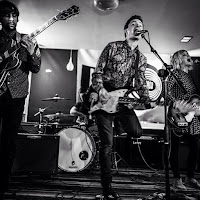 Catacombs is the second track on The Tapestry's recent Connectives single and they've just released a video for it that mostly recorded at their triumphant recent live sold-out show at The Deaf Institute in Manchester.

The video captures all the thrills of a Tapestry live show, the buzzing interconnection between Liam, Katy, Dyna and Zara on stage and their audience. They have crowd surfers, Katy finishes the show spreadeagled on the middle of Zara's drumkit, whilst they still maintain that brilliant beatific rhythmic sound that has won them so many fans in Manchester and far beyond through their full on thrill a minute live shows.