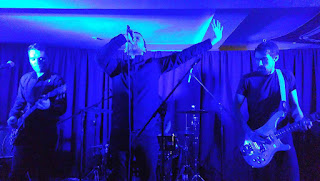 Having built up a following north of the border with a couple of low key Glasgow shows in 2015, The Slow Readers Club returned to play their first headlining gigs in Scotland this weekend.

It's been a busy year for The Slow Readers Club since the release of second album Cavalcade. They have never been afraid of hard work, building up a substantial following with each and every show they've played up and down the country, winning over new fans whereever they have played. There is rarely a week goes by when they are not out there creating their unique brand of pop. Their shows have taken us to some weird and wonderful places over the last few years and this current run of shows sees them both cement their reputation as an expectional live band and acts too as a warm up for their first international shows in a few weeks (a Montpelier Festival appearance and a sell out Dublin gig - plus the added bonus of opening for James on their forth coming tour).  Their new and old Scottish fans were treated to some superb gigs this weekend.

The prestigious Hard Rock Cafe gig sees them play Glasgow for the third time in just over twelve months. Since their Stereo debut last year, word is growing and their Scottish fanbase is swelling. The Hard Rock Cafe is a lovely big venue and as such is the perfect place for The Slow Readers Club’s big sound.  Singer Aaron encourages the initially reserved Glasgow crowd to come forward and have a party before the synths of Fool For Your Philosophy kicks in. The customary set opener is a confident, fired up rocker and shows that The Slow Readers Club mean business. It is well received by the Glasgow crowd. Debut single Sirens is as incendiary as ever. The Starkie brothers come together on the rousing chorus and Jim’s bass powers throughout. There's barely a pause for breath before Start Again. It's their third big hitter in a row. On current form, The Slow Readers Club will upstage anyone they share a bill with over the coming months. 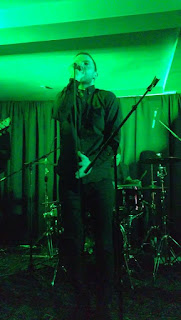 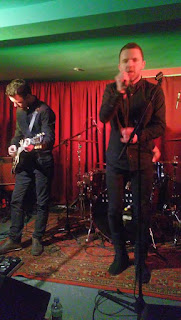 Of course, it's not all big anthems and the band show their versatility with the delightful Days Like This Will Break Your Heart. Like the very best bands, they make sad songs sound triumphant. Don't Mind is their second slower one, and another classic. I Saw A Ghost sees them shift up a gear to great delight from the audience. Forever In Your Debt prompts an audience sing-a-long. It doesn't matter how many times I play it, it always sounds as fresh as ever. Judging from the crowd reaction, they think so too. An acknowledging cheer greets the opening bars of Plant The Seed. A classic piece of timeless pop. Set stalwarts One More Minute and Feet On Fire demonstrate that even five years ago, The Slow Readers Club had the knack of writing and producing great songs. They have lost none of their power over the years and go down a storm with the audience.

As Jim retunes his bass for the finale, Aaron asks if anyone has been to Ayton before, the location for the next show. As it's Glasgow, there is always going to be someone with an answer. We hear it is a “fucking great place” with one street. We will soon find out. Bass retuned and on with Know The Day Will Come.  A triumphant ending to the set - David's millitary drumming coupled with Aaron’s dark, reflective lyrics make Know Your Day Will Come a real highlight.

Despite a cry for (old James classic from the early 80s) Johnny Yen, the band don't play it.  The crowd go home happy however, many now sporting their new Slow Readers Club T shirts.

From Scotland's biggest city to one of the smallest towns in the country. Ayton is just a few miles from the border and on a pleasant spring evening locals have gathered in the Hemelvaart bar. The Hemelvaart boasts an impressive selection of real ale - there's even an alcohol free one on tap for those who are driving. The ale isn't the only thing to impress. In the 8 months since opening, the owners have tried - and succeeded - to host a variety of differing themed nights. In some respects, they have created a venue with a similar ethos of the celebrated Trades Club in Hebden Bridge.

The Slow Readers Club deliver an impressive set to a completely new (seated) audience. Ever the gentleman, Aaron says “good evening Ayton” and gets the first cheer of the evening before the band launch into Fool For Your Philosophy. The sound is crystal clear and we hear every twist, turn, florish and riff from the band. The baseline of Sirens bounces along before Kurt pulls some serious sounds from his Les Paul on an impassioned Start Again. In the current surroundings, the slower songs sound better than ever. Days Like This Will Break Your Heart is particularly well received. Aaron comments that he is alright now, as he introduces another heartbreak song, it was a long time ago. He is a natural front man as his comments throughout the show demonstrate. He looks and feels at home on stage. 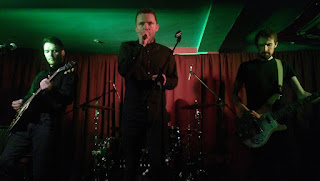 I Saw A Ghost is a real hit with the crowd. Despite throat issues, Aaron does a great job on a slowed down, laidback Plant The Seed.

Their triumphant set again ends with Know The Day Will Come. There are many dynamics to it - building slowly and with a passion, there is no more fitting a way to end the set. The response from the crowd at the end is both genuine and heartwarming. By the end of the evening it looks like everyone has purchased a Cavalcade cd and the memories of the show will live long with the audience.

It was a real treat to catch a band marching forward, on the rise, in such a unique setting. Having seen big headlining shows and festival appearances in the last year, we know we've been lucky to catch them tonight in this intimate setting. The band take it in their stride and play better than ever. We’d love to see a return fixture after the James tour and Festival season is out of the way. We suspect we will be popping up again in Ayton to sample the fine ale, hospitality and music the Hemelvaart have on offer.