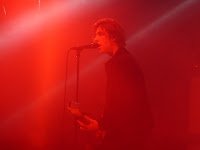 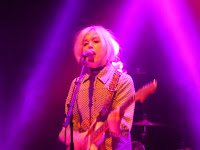 Following up a massively successful debut album and taking new songs on the road when you've got an audience that's still growing and discovering you is one of the hardest things a band can face. The massive contrast between every word being sung back to you at a volume that drowns you out and baying for the next big hit versus the natural musicians' desire to reveal their latest work is one that all successful bands face at least once in their career. Catfish And The Bottlemen are at that point and tonight's gig in the intimate surroundings of Halifax's Victoria Theatre is one of the first tests of that for them ahead of the release of their second album The Ride in May.

Opening up are the fantastic Black Honey, one of our top tips for 2016. This is their first big opportunity at a support slot of this size after regularly thrilling crowds in much smaller venues at their own gigs and they take to the big stage like a fish to water. Whilst the bigger stages mean there's none of the chaos that ensued with the stage invasion the last time we saw them in Manchester, Izzy's got a stage presence to match her show-stopping voice and it feels like she's made to tread stages of this size. 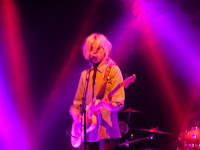 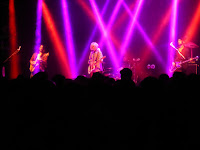 The young Halifax audience is won over almost immediately and there's a heaving moshpit to songs they've never heard before - but the brilliance of Black Honey is that they carry you along with the euphoria of tracks like Corinne, Spinning Wheel and the lead track off their forthcoming Headspin EP entitled All My Pride. It feels almost inevitable, a question of when rather than whether, that they're going to make their breakthrough and the world will be a better place when they do.

The sense of anticipation is palpable as the stage is set up for Catfish And The Bottlemen, the room fills up rapidly, pints are thrown, the rather base chants of Yorkshire Yorkshire ring out (the band aren't from Yorkshire) before the band make to the stage in a blaze of white lights and immediately kick into Homesick sending the crowd wild. It's immediately apparent how The Balcony has become an album that means something to alienated youth in Northern towns - these aren't literary crafted tales of heartbreak and misery, they're about real feelings of life and learning in a place where there's nothing to do except drink and fuck around and learn from your mistakes and that's why they've made such a surprising connection after several years on the toilet circuit (the influence of their label Communion notwithstanding).

They play the whole of The Balcony and four new songs from The Ride - recent single Soundcheck as well as 7, which was played on their last round of dates and two more new songs Anything and Red that were debuted the previous night in Glasgow. There's points where they're playing the first album tracks that Van almost doesn't have to sing and he just steps back and lets the audience take over. It's powerful and sits just the right side of the line that separates the power of music from treading into cliche as everyone around us knows every single word to every song from that record and repeat them as some form of exhumation of pent-up feelings and a communal coming together to celebrate what we have and the survival instinct that the youth of today need. That run of singles - Pacifier, Kathleen, Homesick, Hourglass and Cocoon - are as potent a mix in the live arena as they are on the record. 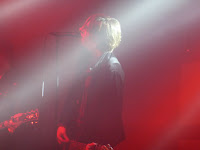 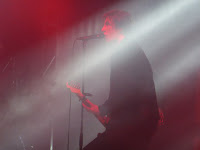 The response to Soundcheck is almost as overwhelming, testament to the fact that the new material might just succeed where others have often failed. It's textbook Bottlemen albeit those hooks are a little harder, a little sharper and a little wiser without quite losing the impact. The ultimate success of The Ride will rest on whether the other tracks can hold their own and it's understandable why they're reluctant to reveal too much in this environment until people have the record in their hands. However, 7 sounds a lot more complete than it did last year and Red and Anything feel right as songs in their own right, but without them in their collective surroundings time will tell on whether they repeat the undeniable and shocking in its scale success of The Balcony.

What is very evident though is that they're a thrilling live band. They have the unquenching belief in the power of cranking up their amps and letting loose and whilst Van might not be quite as accessible now there's big gaps between stage and the barrier, he's constantly seeking a connection with the crowd, looking for faces and even at one point mounting the speaker stack to touch hands with a girl on the balcony. Things will never be the same for them again, they are inevitably going to end the year in the biggest halls the country has to offer on multiple night stands, but they'll do it by taking their people with them.

Email ThisBlogThis!Share to TwitterShare to FacebookShare to Pinterest
Labels: Black Honey, Catfish And The Bottlemen