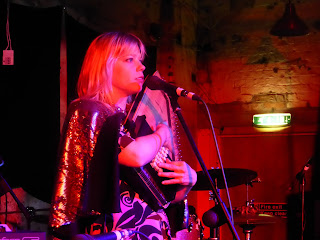 It's two years and two months since Basia Bulat's last Manchester show, an intimate affair on Valentine's Day in Gullivers, but this time she's back with a band and a spangly gold cape to promote her sparkling new album Good Advice. Manchester, as last time, left enchanted by both the music and the personality of one of the most underrated singer-songwriters out there.

Basia starts with four songs from Good Advice and it's clear that there's an energy and chemistry between the band, Basia constantly looking around, smiling, encouraging the rest of them and transmitting her joy and enthusiasm to both them and the audience whether she's at the front of the stage close to us or seated behind her set of keyboards. The songs are as vibrant live as they are on the record, the music countering the darker side of the lyrics that deal across the album with the break up of a relationship. From the performance it feels to us as if the album and now performing the songs live has proved some form of catharsis.

The set doesn't just focus on Good Advice though, Basia jokes that the gold cape doesn't mean she's forgotten that she plays folk songs as we're reminded when she delves into her back catalogue and uses the autoharp on Little Waltz and Gold Rush from her debut Oh My Darling and its follow up Heart Of My Own mid-set whilst some of the band depart the stage. Those stripped back songs allow to us to appreciate the nuances of her voice more, although as she alludes to she is clearly suffering adapting to the UK climate sipping tea between songs. The title track of the latter and of her third album Tall Tall Shadow are further reminders of what an impressive set of albums she has behind her already. 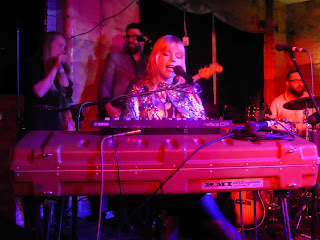 She's effortlessly engaging throughout, whether joking about her height, dismissing issues with the microphones, telling us that she wants to move to the UK, constantly seeking eye contact with her band mates and, during Wires, going out into the crowd to dance amongst us with a lady.

All this serves to make us warm to her even more. She finishes the set with storming versions of Someday Soon and Infamous from Good Advice. The encore is an acappella version of an old Gospel standard called Hush that she used to start her shows with when she first started playing. It demonstrates the depth and soul to her voice as she moves through the ranges of what is a brave song to cover given the emotion it requires, but it's a glowing success as the Soup Kitchen listens on in awe. It's a great conclusion to a gig by someone who deserves a far wider audience than the one she's currently getting.