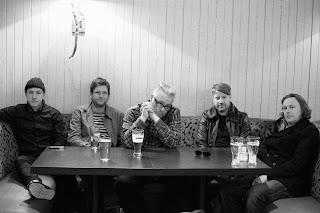 Ahead of their first venture out of Devon to play two shows in Manchester and Scunthorpe this week, we caught up with Joe Duddell of Stella Martyr to find out a little bit more about the band.

Could you introduce Stella Martyr to us please?

Stella Martyr are a 5 piece (sometimes 6) based in Exeter. Brought together to share their similar musical aesthetic and have some fun along the way.

How did the band form - were you in contact with the others before you moved from Manchester to Exeter?

I’ve known most of the band for over 8 years and it was just a question of not having much time to dedicate to it before I moved down permanently. We still don’t have enough time now Which kinda answers your next question in part!

You've not done too many gigs so far - your website lists seven in four years.  Why did you choose to come to Manchester and Scunthorpe now?

We’ve done more than that but yes, we chose the gigs carefully. And they have been either great support slots to Everything Everything and Public Service Broadcast which have been quite high pressure or gigs we’ve curated with local acts.

When we decided to hit the road the idea was to play all the places we are from (Manchester, Stoke, Birmingham and Scunthorpe) but only 2 worked out when we wanted to do them so we’ll cover the other two later in the year. We are also playing Glastonbury and Beautiful Days festivals this summer.

Your bio states  "Stella Martyr inhabit the worlds of dystopia, alienation, nature, disease and conflict, but totally believe in beauty and the human spirit." - is your music all doom and gloom or is their a lighter side to it?

Some of it is quite dark - certainly no love songs - but we have a lighter side too I think. I think the above refers to the lyrics more than anything else.

Your five-track debut EP Neon Traces was released last year - are there more releases in the pipeline and what else can we expect in the set on Thursday other than the tracks from the EP?

Yes, we’ve got pre-EP songs in the set and some written since so there should be a good sense of our progression (if we’ve had any!).

There's another Exeter band called Her on the bill on Thursday night. Could you tell us a little about them?

HER are a band we’ve done a few gigs with and are a really exciting young band winning support whenever they play. We’re gonna have to be on top form as I know these guys are right now!

With so much going on in Manchester on Thursday night, why should people come and watch Stella Martyr?

There’s always loads going on in Manchester! But if you fancy 2 bands that haven’t been north of Devon yet then this is your gig! And there’s a DJ set from Robin Richards of Dutch Uncles too…