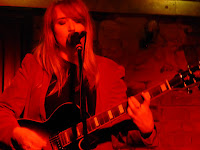 Hannah Lou Clark's tour in support of her new It's Your Love EP brought her to Salford's Eagle Inn where she mixed a solo set and accompaniment from friend Ellie to the delight of a small but enthusiastic crowd.

Hannah came to prominence in her previous project Foe and it's clear from talking to the assembled crowd here that they remember it with a fondness that has them coming back to see what she's developed with her new project and they're not disappointed.

It's Your Love is Hannah's new EP, her second following 2014's Silent Type, and the intervening eighteen months hasn't been wasted as Hannah now has a set of strong songs which to bring on the road, whether she takes them on solo as she does for the first five songs of tonight's show or with the accompaniment of Ellie on guitar and a drum machine that they decide to call Prince in honour of the departed genius. 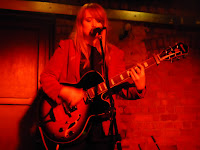 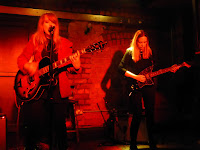 Hannah's set features all six tracks from those two EPs, three brand new tracks and a cover of Roy Orbison's Crying and the standard never drops. The songs she plays on her own at the start - Matilda, Kids In Heat, Euphoria, We're Rich - are much starker than the recorded versions of the two that appear on the EPs but without losing any of their appeal or impact. We're Rich sounds like an impressive future single in the making as well. She then takes on Crying, a hard song to cover in our opinion given Orbison's unique vocal style, but the outcome is far better than some attempts we've heard at people covering it.

Once Ellie is on stage and Prince has been named and some small technical difficulties overcome then things are cranked up a little and we see the more electronic side of Hannah's work mixed with Ellie's guitar flourishes; it's an interesting combination when the drum machine and guitar mix, but one that works, particularly on It's Your Love, the title track of the new EP. But it's one of the new songs that really stands out - Wet Regret sounds like it's a tale of the morning after the night before but told with a little bit of humour with tongue firmly in cheek. She finishes with Silent Type and leaves the room charmed in her wake.

Hannah Lou Clark is on Facebook and Twitter. It's Your Love is out now digitally and on 12" vinyl.