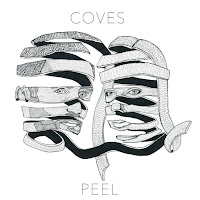 Soft Friday was voted third in the Even The Stars end of year poll in its inaugural year. Since then the band have toured with St Vincent and in their own right to support an EP which neatly bridged the gap between albums. Now they return with a fantastic follow up to their timeless debut. Peel sees the band, having relocated to London, beefed up yet still delivering the same classic pop we have come to expect.

Opener Cadavalier is more dance orientated than we've heard from Coves yet still retains their distinct pop tinged sound. You're Evil has an infectious vocal opening. Coves favour the same approach to pop as the Jesus and Mary Chain - they're not afraid to crank up the guitars whilst sharing their love of melody. Some simple, yet soaring vocals added to the mix and they've created more perfect pop. Tripping Over Lust is stripped of their wall of sound allowing Bec to take centre stage with her haunting, sometimes melancholic voice. Stormy should be a smash hit single - neat guitar riffs, a bouncing bass line and a singalong vocal refrain over the chorus.  To The Sea has a end of pier organ running through it creating a more retro garage sound than we’ve heard before.

See Me Love Me is the closest we get to an album filler but it still has its merits whilst I Just Don't Care has some dirty funky wah wah guitars from John with a simple repetitive chorus from Bec. So Empty treads a similar path. This more dance orientated sound is sure to expand their audience and just when it seems like they have mapped out a course for their future, something quite extraordinary pops up.

The most blissed out, velvety sound that we have become accustomed to returns on I'm Not Here. It is the standout track from Peel by a country mile. Absolutely stunning.  Worth the price of the album alone.

In Peel, Coves have produced a worthy follow up to the classic debut. Welcome back.