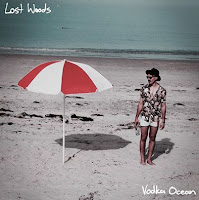 Vodka Ocean is the lead track from the forthcoming debut EP by Adelaide's Lost Woods.  With two singles under their belt already - and the fabulously titled Ancient Psychic Tandem War Elephant - they've already established themselves as a regular fixture on the local Adelaide scene, but on the basis of Vodka Ocean, we wouldn't be surprised to see them spreading their wings outside Australia in the not too distant future.

The song was described to us, and it tells you all you need to know, by front man Pete as

"a punchy, jangly indie/rock tail of woe that occurred at an Australian music festival (Splendour in the Grass). In short, Frank Ocean announced he was cancelling… In a fit of melancholic sadness, I got to know vodka way too well… and subsequently the medical tent… My girlfriend dragged me back to our tent where I proceeded to throw up all over her rucksack/clothes leaving the rest of the tent unscathed. Naturally a song was born. I hope you like it!"