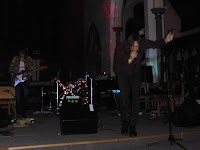 It's six long months since we last saw Purple Heart Parade which feels like a lifetime. They're still on the outside looking in at the Manchester music scene, often more loved away from their home town than they are here, other than by a band of hardcore disciples. We caught their headline set at Chorlton's Big Green Happening at St Clement's Church on Saturday night.

The plan was for Purple Heart Parade to play an hour tonight, but all sorts of issues with the previous acts meant that we only got about half that time, but it was enough to underline that Purple Heart Parade are a pretty unique proposition. Whilst they have brothers in arms both in the city (Freakout Honey, Control Of The Going et al) and outside (the masterful The Lucid Dream), they tread their own wild path out on the edges of the sonicsphere. Out of the battered claustrophobic maelstrom of the sound created by brothers Mike on guitar, Ste on bass and Keith on drums, come moments of real clarity and beauty, inspirational uplifting other-wordly sections in songs that appear, lift you up, and then disappear back into the ether. All this is accompanied by a stunning light show from White Rabbit that illuminates the stunning interior of St Clement's. 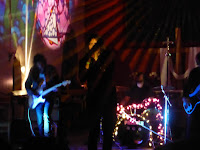 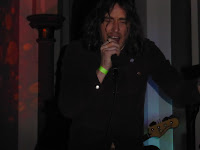 The likes of The Room, Starfucker Blues, Moonlight Burn and Burnorator are more than just mere songs, they're massive widescreen statements of intent that feel like they've been created by an army rather than three magicians with mere instruments as their tools of war. And in the middle of all this cacophony is front man Peter Cowap - a gentle giant transformed into a wizard the moment his mates strike up the first bars. He's amongst us, on the floor on his knees, lost in his own world delivering vocals that often get lost in the noise the other three are creating that echoes around this divine setting, but that doesn't matter as Purple Heart Parade are about what they create as a whole, an experience, a journey, a trip. They're not interested in writing you a three minute pop song when they can rip your head off with six minutes of intense sound that you're helpless to resist, bounce it around the room and still leave you smiling at the other end.  The sound is quite frankly awful due to the set up of the event and the overrunning despite the sound man's valiant efforts, but no one seems too bothered as the disciples praise their lords as the set reaches its finale.