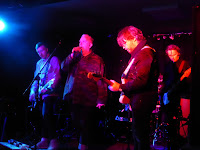 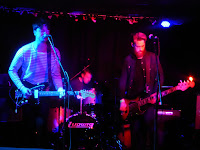 This is Stella Martyr's first show outside of Devon in support of their Neon Traces EP and they're accompanied, and almost upstaged, by Her who prove themselves to be one of the most exciting new bands we've heard in a while as they make their first Manchester appearance.

It's hard to believe that Her only formed in September because the three-piece band feel fully formed already such is their confidence and their mastery of their songs and their performance. It's no surprise that BBC Introducing love them and they recently got invited to London for Fierce Panda and Club Fandango's night. Their bass player Si holds his weapon slung low like a modern-day Peter Hook and at times it sounds more like a six-string than a four-string the way it dictates the pace and the direction of the song whilst front man Sam effortlessly cajoles some fierce sounds from his guitar and not to be undercalled is drummer Jonny who frantically propels the songs forward.

Their eight song set features seven originals, including all three songs from their first EP that's on their Soundcloud page, and their concluding and spectacular cover of Bowie's Andy Warhol and there isn't a weaker song amongst them. They're a band that manages expertly to both nod to their influences (The Smiths, Arcade Fire, Joy Division we can hear in parts), but without ever compromising their own individuality and the sound they've created. We're still stunned they've only been together six months, but with a new EP recorded ready for release, we're going to hear a lot more about them. 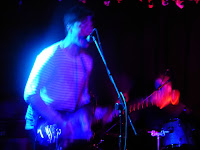 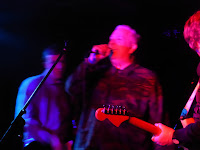 It was a brave move Stella Martyr bringing such an obviously talented young band with them on the road and it gives them a lot to live up to. Expanded to a six-piece with the prodigiously talented in her own right Annie Rew-Shaw on keyboards, they mix songs from their Neon Traces EP with songs recorded before that as well as new as-yet-unrecorded ones. Opening track Overlook has a line "all work and no play makes Jack a dull boy" and that's the philosophy that runs through their set - too often you watch a band that's past their first throes of youth appear desperately dull and serious, but Stella Martyr are clearly there to have a bit of fun too without compromising on their music.

They do remind us in parts of the set of some of the great Factory bands of the 1980s, when Annie's vocals come in they tip us towards Section 25, but they're no copyists either. Guitars duel with each other to make the most noise, and the lead is at times just at the very tipping point of distortion, and there's samples in German at the start of Running Rabbits and the final song, which we think through the alcohol fog of the evening was called White Roses, is a great way to finish. Front man David is an engaging leader of the band with sharply observed comments between songs and a voice that matches the starkness of the music his mates are producing. It's the first time they've ventured out of Devon but hopefully it won't be the last.

Email ThisBlogThis!Share to TwitterShare to FacebookShare to Pinterest
Labels: Her, Stella Martyr