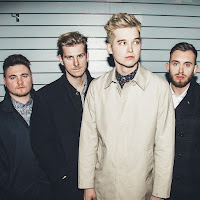 It's been awhile since we heard anything from Jordan Allen, but he's back having played a couple of low-key gigs in his native Bolton recently with a new single called Helter Skelter.

The song manages that neat trick of keeping what first attracted us and so many others to Jordan in his social and political commentary and ability to put a story eloquently to music, whilst widening the scale and scope of his sound. Helter Skelter sounds like a big song with a big production that's ready to catapult him from the relative obscurity of the North West scene into the conscience of music lovers everywhere.